I apologise for the length – a rare thing for me to get to say, given my size, stature and makeup.   But seriously, some Missives are more important than others.

Please grind through this one.  It is driving my investment thinking.

A select few areas in Australia generate most of our wealth.

These are often a very long commute from where many Australians live.

If the current trends continue, more people will want to live closer to these economic generators; hence the rising attraction for more compact living.

But most cannot fit into or afford to live in a downtown apartment.

More infill development is needed, coupled with better transport infrastructure, plus an active government programme to decentralise some of our knowledge-intensive work activities to our more suburban settings.

This reissue – yes, we have published this as a PDF in the past and it is a summary of a great report from the Grattan Institute (go here to get the report) – for mine, also shows that investing outside of a major “economic” centre is increasingly fraught with risk.

There are exceptions, but the trends appear to be stacked against them.

Just over 100 years ago, we were actually living our reputation – dependent on the bush.  About four million Australians lived on rural properties or in small towns of fewer than 3,000 people.  Most were market towns, serving the agricultural economy.

Only a third of Australians lived in a city the current size of Toowoomba (i.e. over 100,000 people).  Primary production, including mining, was almost all we did.

Post WWII, manufacturing took over from growing and digging things, accounting for a quarter of the workforce and a third of our GDP.

This led to a rapid rise in household wealth and a big shift to urban living, especially suburban homes.

By the time I was born – the mid-1960s – three out of five Australians lived in a major city.

Manufacturing has greatly influenced how our cities are laid out.  Industry needed cheap land.

The rise in car use and ownership helped make manufacturing and suburbia go hand in hand.

By the time I started high school, four out of every five trips were made by car.

Fast forward to today and Australia is no longer driven by what we make, but rather by what we know and do.

Yes, mining has been pivotal to our economic growth in the recent past, but it employs just 2% of the workforce, and has never accounted for more than 10% of our GDP.  At last count, it made up 5% of our economy.

Our economy is increasingly becoming knowledge-intensive, more specialised and much more interconnected.

Did you know that our five largest urban areas – Sydney (plus Wollongong and Newcastle); Melbourne; south-east Queensland; Perth and Adelaide – account for almost two thirds of our economy?  That’s 67%…and that isn’t a typo.

Our graphic, this update, maps out the Australian economy. 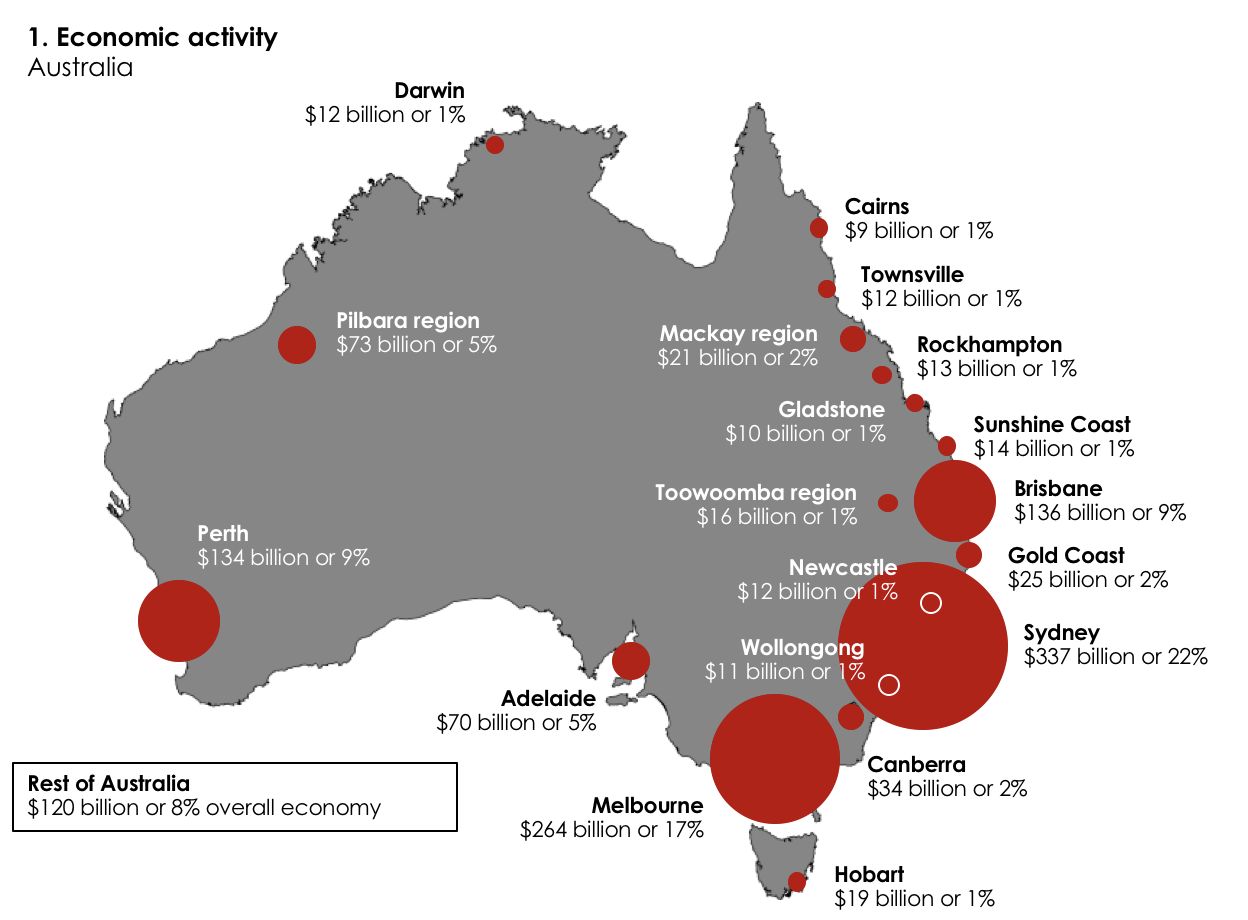 Australia’s largest cities are critical to their respective state’s economic performance, with Melbourne, for example, accounting for 79% of the economic activity in Victoria, whilst Brisbane (in the most decentralised state), makes up 46% (with SEQ 59%) of Queensland’s economy.

Brisbane’s economy alone is estimated to be in the order of $136 billion.

Even regional economic activity and its growth are tied to our larger cities.

Regions within an acceptable commuting distance are typically growing much faster than more distant regions.

Of course, in each city, economic activity is more concentrated in some parts and less so in others.

In fact, many parts of Australia’s cities produce relatively low levels of economic activity, despite a lot of people living there.

Most live in these areas of low economic activity and commute to work in employment nodes.

The Brisbane CBD generates about 20% of the city’s economic growth.  This is six times that of the next most productive area in the greater Brisbane area.

These secondary centres of economic activity include Rocklea/Acacia Ridge, South Brisbane, Paddington, Fortitude Valley and Brisbane Airport.  As is the case with the other major capitals, most of Brisbane’s economic activity takes place in and around its CBD.

Why? Because businesses are more productive when they interact with larger numbers of customers, suppliers and competitors – and when they are forced to do so with more frequency.

The same phenomenon applies when looking at why larger cities are more economically productive than smaller ones, or those in other parts of country.

Most Australians today are employed in the service industry; and whilst a lot of these are becoming more knowledge-intensive, or at least involving greater use of technology, seven out of ten jobs still remain outside of our inner city areas.

It’s true that a large number of knowledge-based workers believe that the benefits of living close to the city outweigh the higher cost of housing; less dwelling space and generally greater expenditure needed to be an inner city resident.   Yes, it does cost more.

But many of us cannot afford to live downtown.  Yet, for the economy to function, we do need to live within an acceptable commute to work.

Even more so, if we are to see more part-time jobs being created in the future.

This casualisation of the workforce is due, ironically, somewhat to our greater use of technology and increasing emphasis on becoming a more knowledge-based economy.

So, either more infill housing needs to be built across our middle and outer city suburbs; or we need better transport systems between home and major places of work; or more knowledge-based work needs to be moved to where people currently can afford to live.

A combination of all three is what’s really required to help Australia’s economy grow.

It appears somewhat safe to assume that the service industry will remain our biggest source of employment and increasingly the muscle behind our economic growth.  Once more – labour specialisation.

Most service-related jobs are concentrated in small areas.  As a result, our economy is – as our map clearly shows – clustered into a handful of urban areas – and within them, in even tighter geographic confines.

This geographic trend looks set to continue – even accelerate – into the future.

That being true, then it looks to me that it would be best buying an investment property in one of the bigger red dots on our map, rather than in a more regional locale.  Of course, good exceptions do apply.

When it comes to buying within an area itself, it might be best to buy as close to one of the city’s economic “pulse points” as you (and your tenant profile) can afford.