Much is written about population growth and its positive impact on most things economic.

But there is also sting in that tale.

Despite the intelligentsia telling us the opposite, the number of vehicles per capita, is on the rise in Australia.  It is currently 776 vehicles per 1,000 bodies.  It was 723 a decade ago and just 644 in 1998. 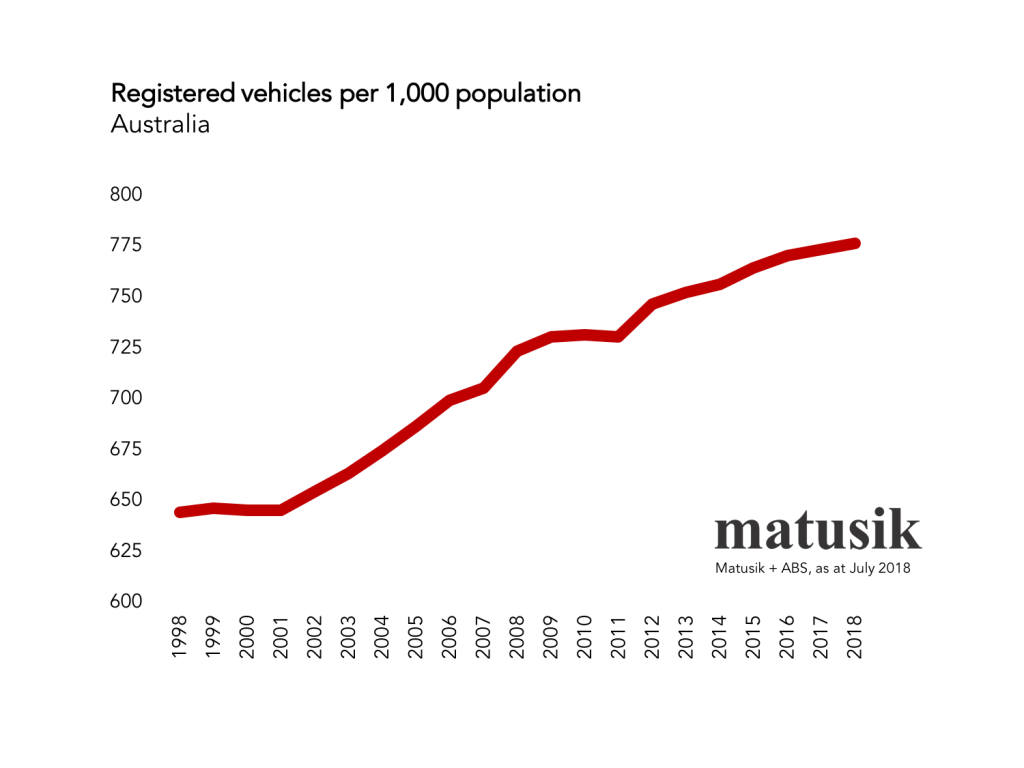 Gentrification, urbanisation, uberisation and all those other trendy urban movements haven’t yet had an impact on our car use and especially the number of cars on our streets.

There are just over 19 million registered vehicles in Australia, which is up 25% on ten years ago.  Pity our road and parking capacity hasn’t increased anything like that volume over the same time frame.  It is no surprise that traffic congestion has become much worse and many of our streets are now parking lots.

Tasmania, in particular, is feeling the change with 921 vehicles per 1,000 people and a 17% increase in this statistic over the past ten years.  Queensland, South and Western Australia are also feeling the heat.

Interestingly Victoria – read Melbourne – has seen little change in the ratio of vehicles per population.  Yes, their recent high rate of population growth has seen their streets get more crowded, but it is not as bad as it might have been.

There are lots of lessons here including Melbourne’s somewhat more decentralised workforce; medium density infill housing in Melbourne’s middle and outer suburbs; the city’s range of effective public transport options and a strong local culture of public transport use.  It isn’t prefect but better than what is (or more to the point, isn’t) happening in our other urban centres.

So, when you hear all the positives about population growth, remember 1,000 additional people means 776 more cars, Australia-wide, and closer to 817 more cars in Queensland.

Maybe driverless cars will reverse this trend.  GoGet and other car sharing schemes might help too.  But I am not that convinced.