Each quarter the ABS releases its Demographic Statistics which holds the latest population results for each Australian state or territory.  These figures include interstate migration movements.

Queensland’s improving population growth is usually accompanied with rising property values.  But this doesn’t appear to be the case at present.

But before I explain what I think is going on, lets quickly summarise where things are at when it comes to population growth.

Talk has now turned to it being Queensland’s turn to enjoy some serious property value appreciation as residents migrate north from Sydney and, in some instances, from Melbourne.

Many believe this to be the gospel truth.  Trying to contradict this mindset is increasingly hard.

So, I will let my four charts do a lot of the talking. 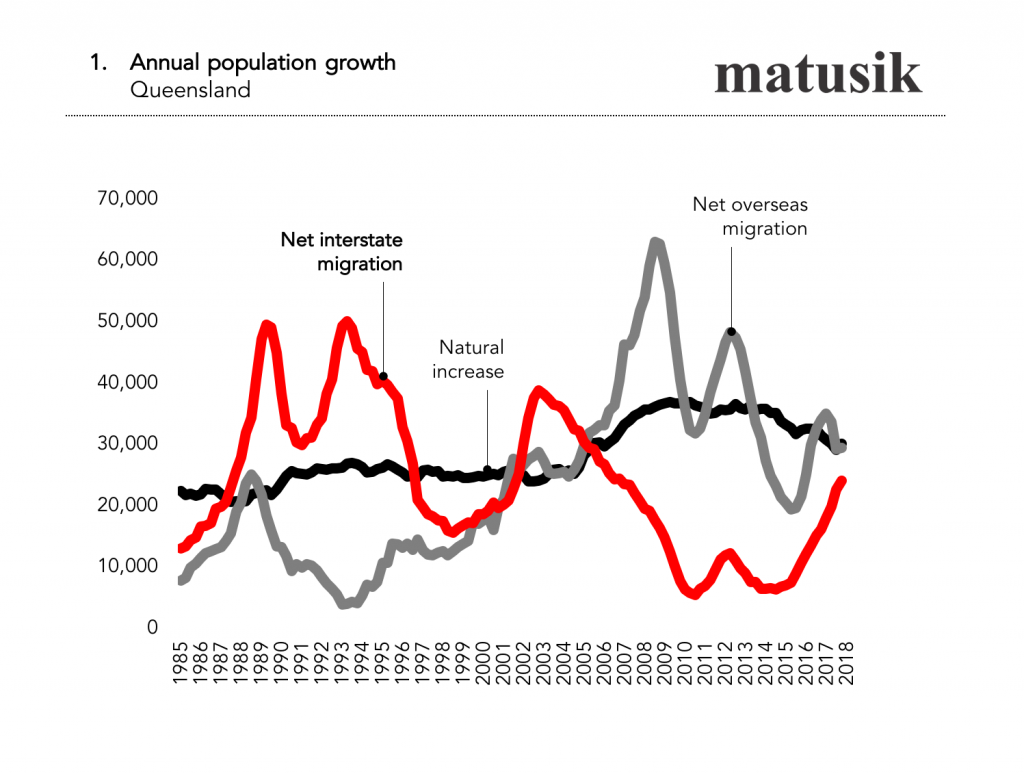 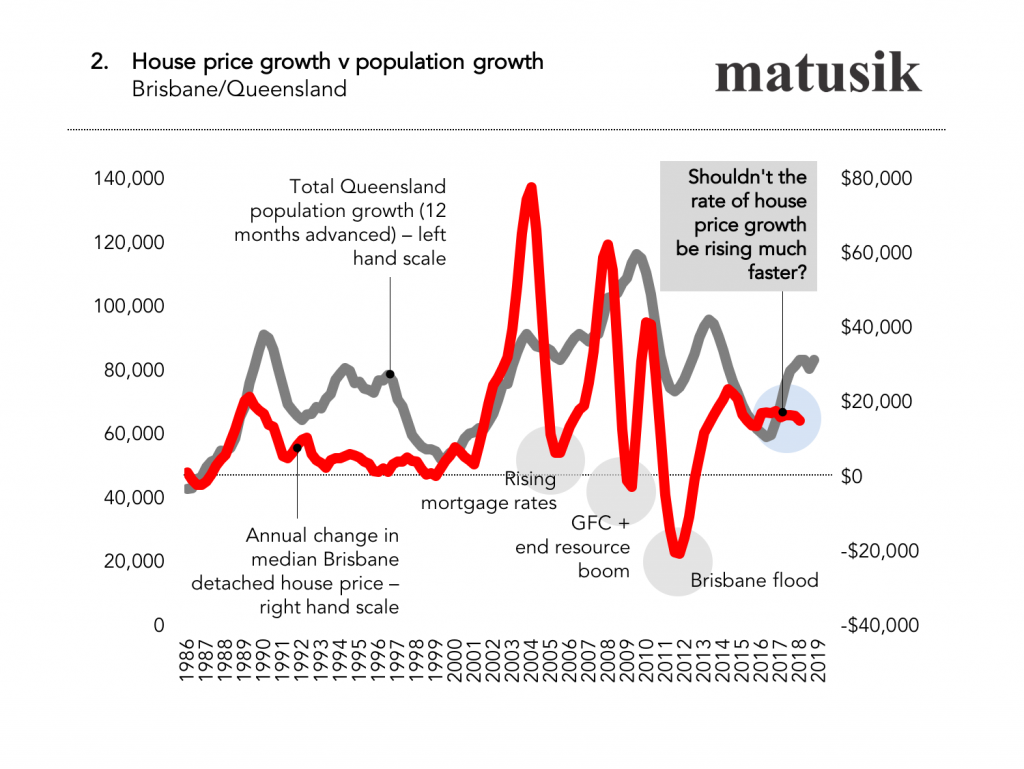 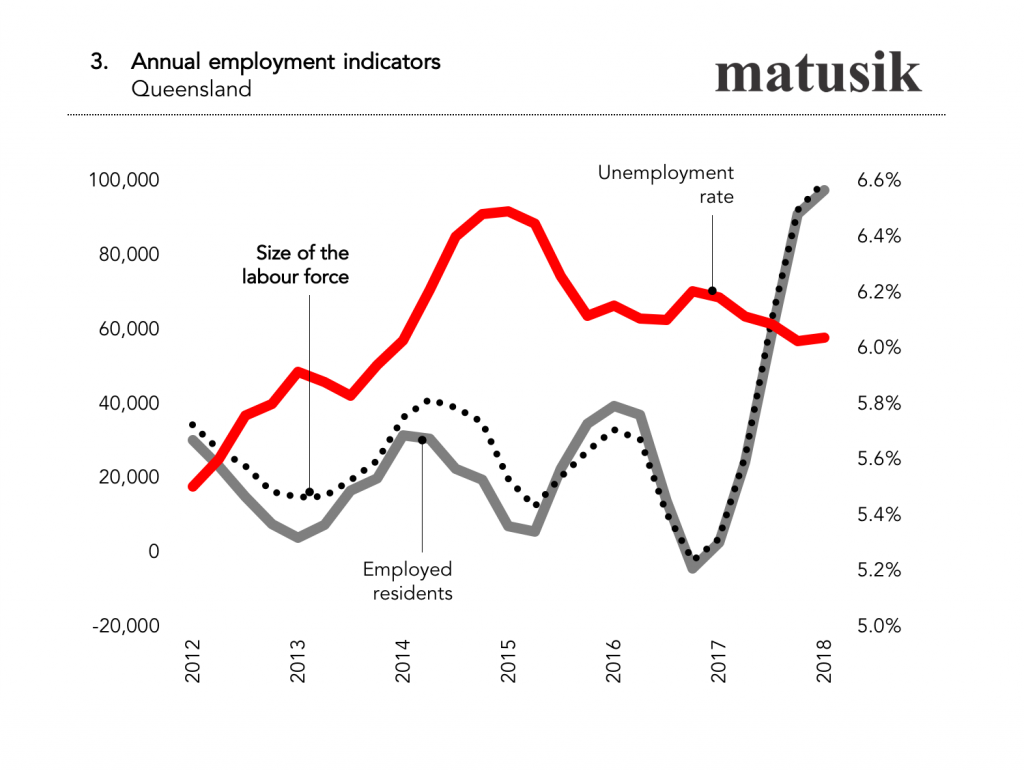 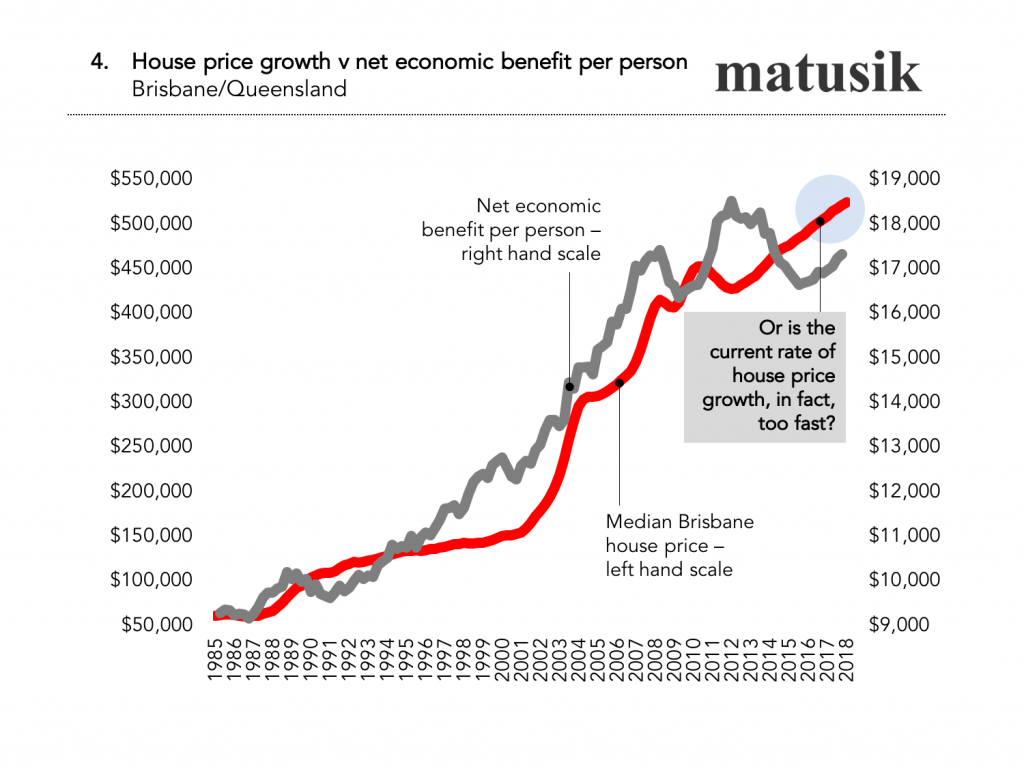 Chart 1 shows that Queensland’s net interstate migration is on the improve, up from 6,000 people in 2014 to 24,000 over the last twelve months. But it still accounts for less that 30% of the state’s annual population growth.  So, the other components of population growth – being natural increase and net overseas migration – are really having a bigger impact.

In general, there is a relationship between the two – higher population growth usually means more upward pressure on house price growth.  Yes, sometimes this relationship has lapsed for a period of time but there have been valid reasons why as I have noted in chart 2 via the grey highlights.

And importantly chart 2 suggests that property values across Queensland, and in particular across the south east corner of the state, should be improving at a much faster growth rate. See my blue highlight.  Yet the annual growth rate remains sluggish and has even taken a backward step over recent months, despite the lift in population growth.

Yes, the recent overbuilding of inner Brisbane apartments is having an impact but in the overall scheme of things this impact is small.

Something else must be going on.

That something else is shown in Chart 3.  This chart shows that job creation isn’t getting ahead of the increase in population, so Queensland’s level of unemployment isn’t changing much.  In other words, a high proportion of the interstate migrants moving to Queensland are unemployed.

On that note most of Queensland’s interstate migrants come from Sydney and in the most part are young couples trying to make a new start in Brisbane.  In short, they are economic refugees.

And chart 4 – for mine – brings home the bacon.  This chart shows that the net economic benefit per capita or head of population in Queensland is in a slump.  It is rising in both New South Wales and Victoria.

This chart also shows that there is a strong connection between economic benefit per head and house prices. When we aren’t all sharing in the economic spoils, local property values either flat line (as they did in the early to mid-1990s) or actually fall (like they have done in the recent past).

Because of the delay factor between economic well-being and house values, the recent fall in economic benefit per head suggests that local house values, could actually stagnate, not rise, in the coming years ahead.

So, more bums on a Queensland seat – this time around – isn’t shining everyone’s backside.

Yes, the total rate of economic growth in Queensland has lifted of late, but this isn’t being shared amongst the local residents as it has been done in the past.

To summarise, in Queensland, there is too many people and not enough economy.

It gets to the stage where just increasing the size of the local population isn’t enough.

So, whilst there is increased interest from interstate (and an overall lift in population growth), unless we see a dramatic improvement in the state’s economy, more bums on seats isn’t really doing the average Queenslander much good.