But for those of you that are time short, I have pulled together 10 things you need to know about this work. Many of them are quite surprising.

1.  Most residents don’t live far from where they work, and this isn’t changing much.

2. Commuting distances have changed little in most of our cities in recent years.

3. Commuting times have also been largely stable over the last decade.  See the table below.

Three-quarters for work trips are no longer than this

4. The CBD’s are growing (in terms of jobs) in Sydney and Melbourne but are actually shrinking in most other Australian cities.

5. Most new jobs are in other suburban areas, with three out of four jobs widely dispersed.  See the diagrams below.  Diagrams one and two are what is in most town planners’ heads, but the third diagram is what really goes on. 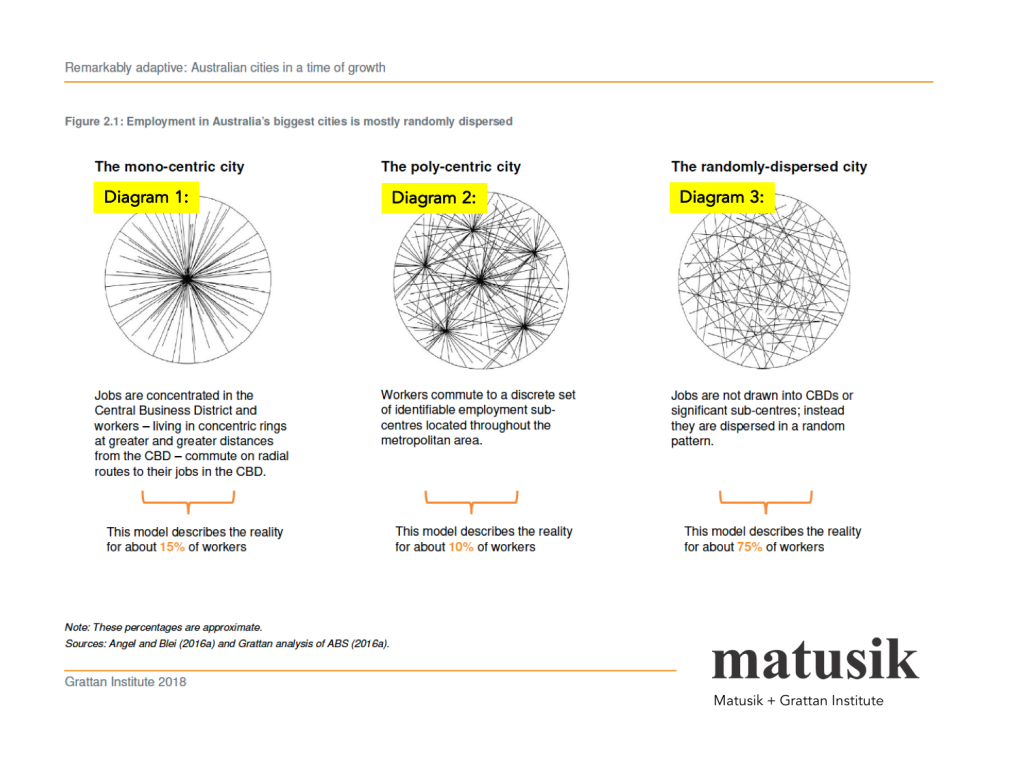 6. Living in a large Australian capital city doesn’t mean travelling much further than living in a smaller capital or major regional town.

8. Population growth has a bigger impact on commuting distances and times in smaller cities than large ones.

9. People accept a longer commute to live in a lifestyle area and in particular close to the beach.

10. In recent years very few workers have actually changed the way they get to work.  See the table below.

But some caveats do apply.

1. Some cities have grown a lot in recent years – especially Sydney and Melbourne – and much of this increase in population is due to a lift in net overseas migration.

2. Most overseas migrants settle in Sydney and Melbourne.

3. Many recent migrants settle in the more urban parts of our capitals, whereas longer term residents live (mostly) in the middle and outer suburbs.

So, some of the ten points listed above have been influenced by recent demographic trends.

Yet here are some things worth considering that might actually improve the current state of play.  Some of these suggestions are Grattan’s and some of them are mine. These include:

1. Get more people to work from home via tax breaks and favoured appointments.

2. Question the mega projects.  Incremental improvements are likely to have more impact. In Brisbane for example there is a need for many more bridges crossing the Brisbane River.  These are cheap as chips when compared to such white elephants as Cross River Rail.

4. Change the way people get to work.  A congestion tax and/or free public transport during peak periods.

6. Stagger school start times; school holidays and change the 9 to 5 work day.  These schedules are a legacy of the industrial age and/or unionised labour.

7. Provide clear and separated modes of transport. Get push bikes off the road but have well connected bike lanes.  Better connectivity for walking too.