Here’s a typical example of THE Monday morning real estate headline these days:

Preliminary data from CoreLogic shows that Sydney’s residential market recorded an auction clearance rate of 77.2 % on the week of the 8-14 July, compared with 46.9% at the same time in 2018.

Real estate agents cite factors such as recent official interest rate cuts and positive sentiment in the wake of the federal election for the higher-than-usual winter sales activity.

But what is really being measured here?

Of course, caveats apply, and they include the following CoreLogic rules.

Auction clearance rates are calculated for auctions scheduled during the week ending Sunday and are based on available data using:

In preparation for writing this post I asked some 50-odd people – many in the property industry, some novices and others with no interested in real estate at all (yes, they do exist!) – what they thought an “auction clearance rate” actually meant.

Nearly all replied something along these lines “the property was sold at auction…on the day…under the hammer…and at or above the reserve price”.

Well my friends it means nothing like that at all.  In fact, the actual results are as clear as mud.

At the time of writing the final results for the week of the 8-14 July weren’t available, so I have used the results for previous week instead.  It matters not.  My findings will be the same.

And I want to zero in on the Sydney house auction results. Again, my findings apply to all markets outlined in the table below. 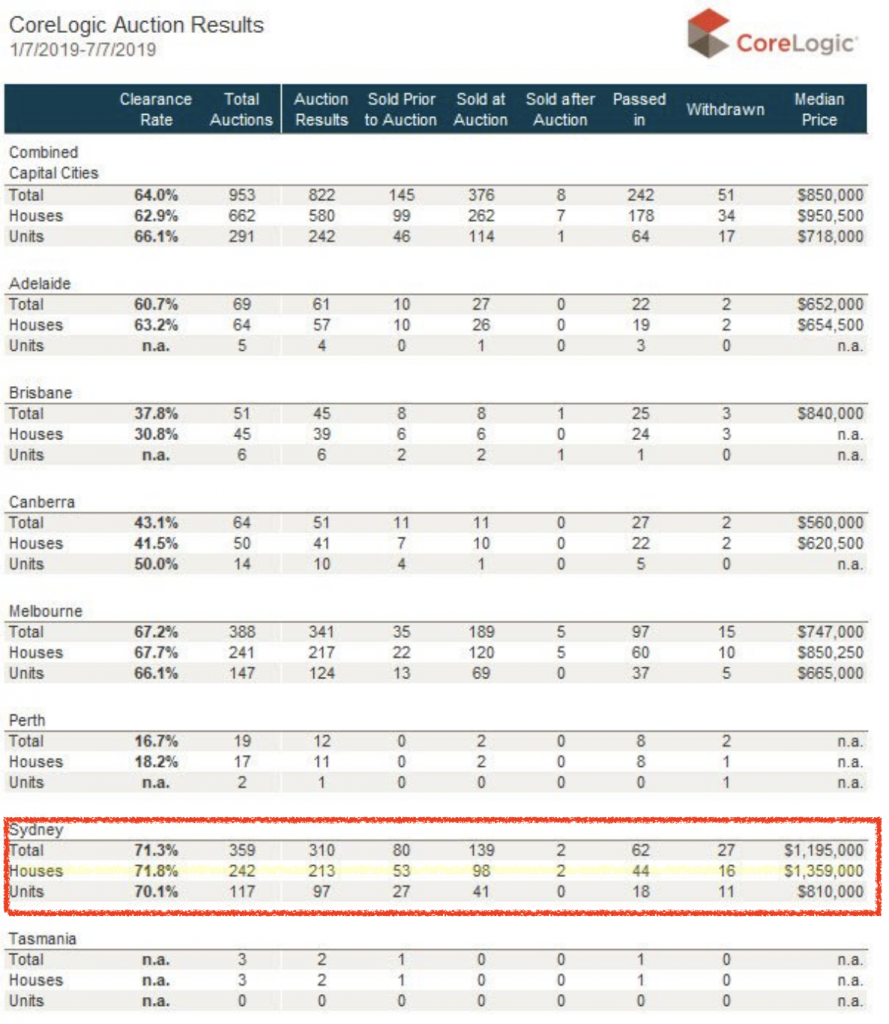 But wait there is more!

One assumes that these 29 houses are still for sale.

But given what my straw poll suggests, most think the auction clearance result should be actually 40% i.e. 98/242.

Also, auction clearances only seem relevant in select markets.  These include Canberra, Sydney, Melbourne and to some degree Adelaide for detached houses. Also, they have more relevance to house sales rather than apartments.

The table below shows why.

There is little doubt that the promoted auction clearance results – regardless of the exact measurement – have improved in recent months.

There is also a past strong relationship between the change in median house prices in Sydney and Melbourne and the promoted auction clearance rate results.

Yet I cannot help but think that this indicator is touched – like too many things in the property space these days – with more than its fair share of fraud.

It pays to understand what is actually being measured.