A few weeks back I mentioned in passing the Federal Housing Minister.

This prompted several on the Missive mailing list to ask me what I would do if I held that position.  Serendipitously, I engaged in a similar online discussion a week or so ago and that resulted in being asked to speak at several business forums over the next month or two.

So, what would I do if I was the Federal Housing Minister?

At present over 60% of our domestic credit goes to housing related activities and just over 30% goes to business.  A generation ago these were the opposite.  See the chart below. 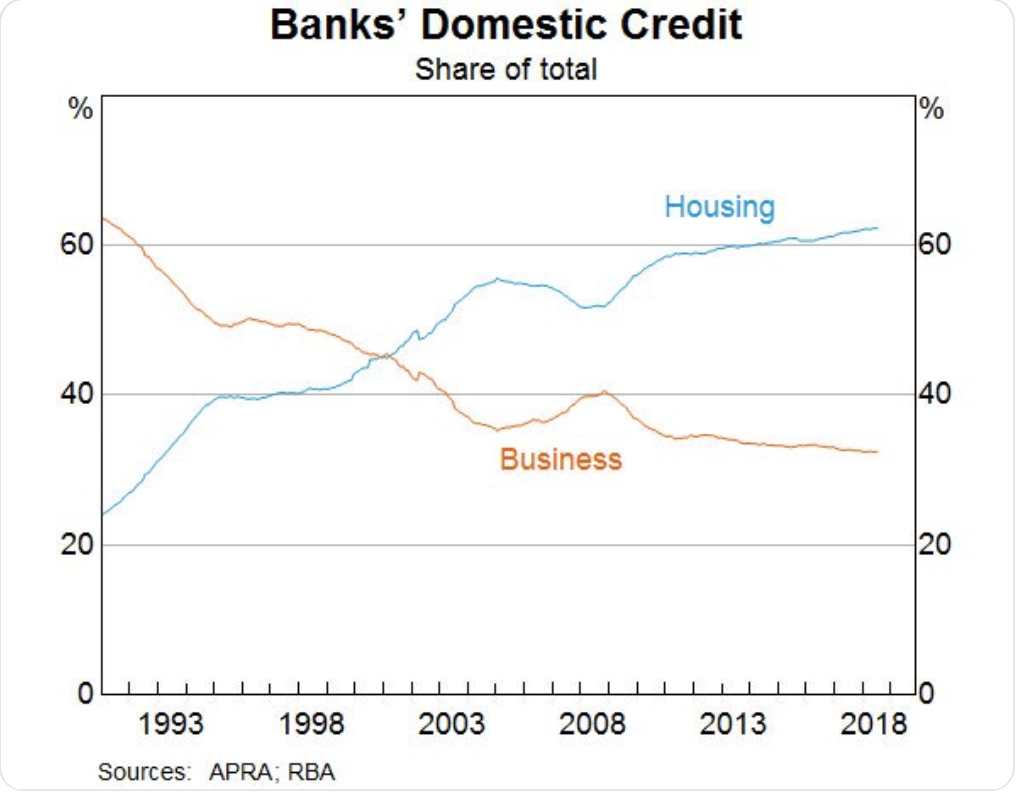 This is one of the most telling charts on the Australia economy, yet it gets little airplay nor is it regularly updated.

My aim – as housing minister – would be to reverse these proportions over the next 25 years, if not sooner.

That said, here are the ten things I would do.

1.  All publicly promoted/exposed housing market-related research, such as price growth predictions, must go through a peer panel review and an equally weighted ‘con’ argument must run alongside the ‘pro’ pitch.

2. All states/territories to remove stamp duties and federally we will remove the investor capital gains tax discount and all negatively gearing tax breaks.

3. Impose a broad based land tax on all properties set at between 2.5% and 5% per annum, depending on use, tenure and length of time held.  Overseas interests pay a higher rate per annum.  Too many land-bank.

5. Stop all first home buyer grants and related gifts – they just stuff things up by making housing less affordable, distorting the building cycle and resulting in fewer first home buyers than would otherwise be the case.

6. You cannot use more than 50% of your SMSF assets to buy an investment dwelling/s.

7. Same set of development and building rules across the country varying only due to climatic conditions.

8. Infrastructure charges per new dwelling are also the same across Australia, set at 5% of sales price and payable on final settlement.

9. Caveat emptor applies to all buyers – off-plan included and especially high-rise apartments.  And developers and builders are responsible for all shonky workmanship, within a specified time frame and with fair caveats, not the general public.

10. No Passport, No Buy – regardless of dwelling type, development status or origin of purchaser.