Of late most of these shovel-ready projects involve new civic construction.

The two charts below show the amount of construction work approved but yet started across Australia. 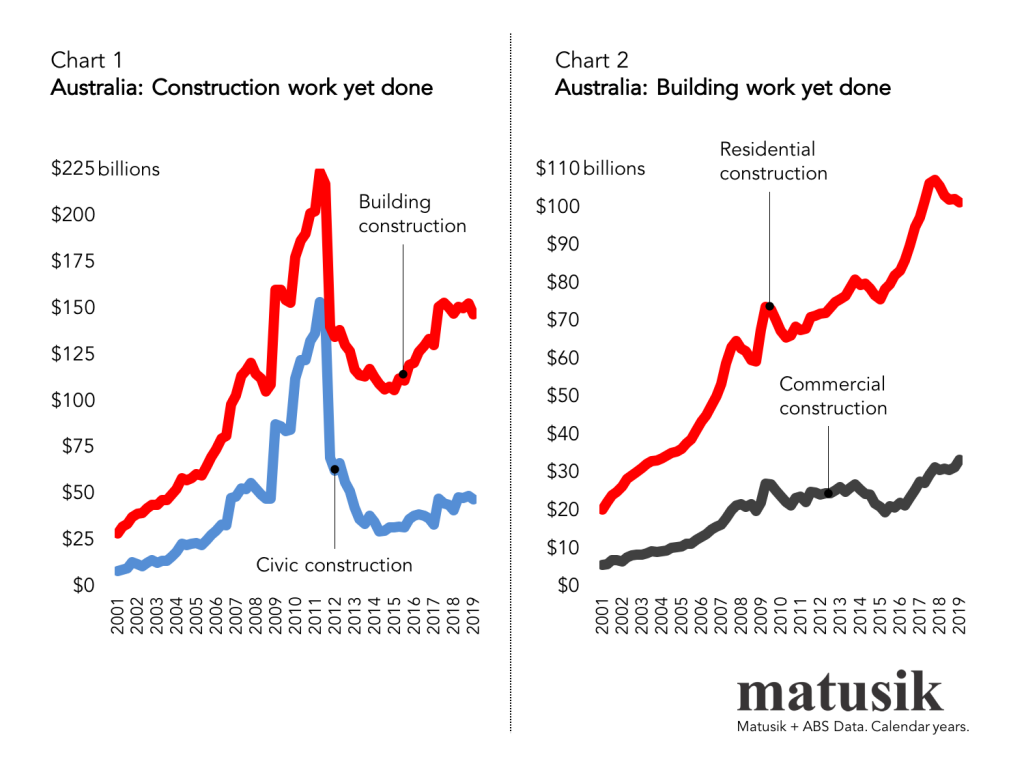 So, in short, the amount of anticipated building construction is twice as large as the potential civic work and the awaited home building is double the size of the commercial building work waiting in the wings.

One would think that the main aim of any COVID19 construction-related stimulus is to help with employment.

Building accounts for the lion’s share of the construction industry’s employment, while the civic sector has a much smaller labour force.

Yet the government is focusing on civic projects not building construction.

Also, building activity was already falling prior to the pandemic, suggesting that there was surplus capacity already developing among builders even before COVID19 hit our shores.

As well, building activity is almost entirely privately funded, so it is far more sensitive to a recession than the public sector.

This makes a pretty strong case for favouring the building sector with any construction specific inducements.

We should be stimulating the whole building industry and not just new house and land packages or top end renovations for a quick six-month boost as per the HomeBuilder package.

We need a more evenly spread building package – covering all building types and geographic locations – plus one that covers several years not just months.

Moreover, stimulating via the civic segment may actually do more harm than good as this sector is already operating close to capacity.  Pumping more money into any industry that is operating close to full capacity will create labour shortages and inflate prices.

Some think this focus on new civic work will create much-needed employment for workers displaced from other industries.  This should be a concern.  Reallocating workers between sectors as a short-term fix can create long-term problems.

The mining boom was a classic example.  Workers were diverted into a boom that was temporary.  When the bust came, many of those workers found it very hard to relocate back to their previous work.  A decade later and many of these workers still remain underemployed.  Some are even unemployed.

Another aim of any government stimulus should be to preserve workers’ attachment to their pre-COVID19 occupations wherever possible.

That’s why JobKeeper was designed as a business subsidy and one of the biggest recipients of JobKeeper has been the building industry.

Shovel ready?  I do wonder.

I am grateful to Robert Sobyra, Director, Research & Digital at Construction Skills Queensland for this words of wisdom in putting together this post.

Furthermore, governments, more often than not, build the wrong infrastructure i.e. Cross River Rail rather than new bridges crossing the Brisbane River.  It speaks volumes when the top ten infrastructure projects in Queensland are all located in, or converge on, inner Brisbane.

Yet it pays to understand why such things keep happening.  You may have also missed my thoughts on why I think Brisbane needs more bridges.