Population growth is made up of three components – natural increase (births versus deaths); net internal migration and net overseas migration.

We covered natural increase earlier this year.  To revisit go here.  Next week we will update overseas migration and this week we cover internal migration.

Internal migration involves both interstate and intrastate population movements.  It also involves a net result, being people arrive, and depart, a location.

This post is also a bit data heavy.  But bear with me.  Three charts and three tables are included in this post.

Let’s start with the charts. 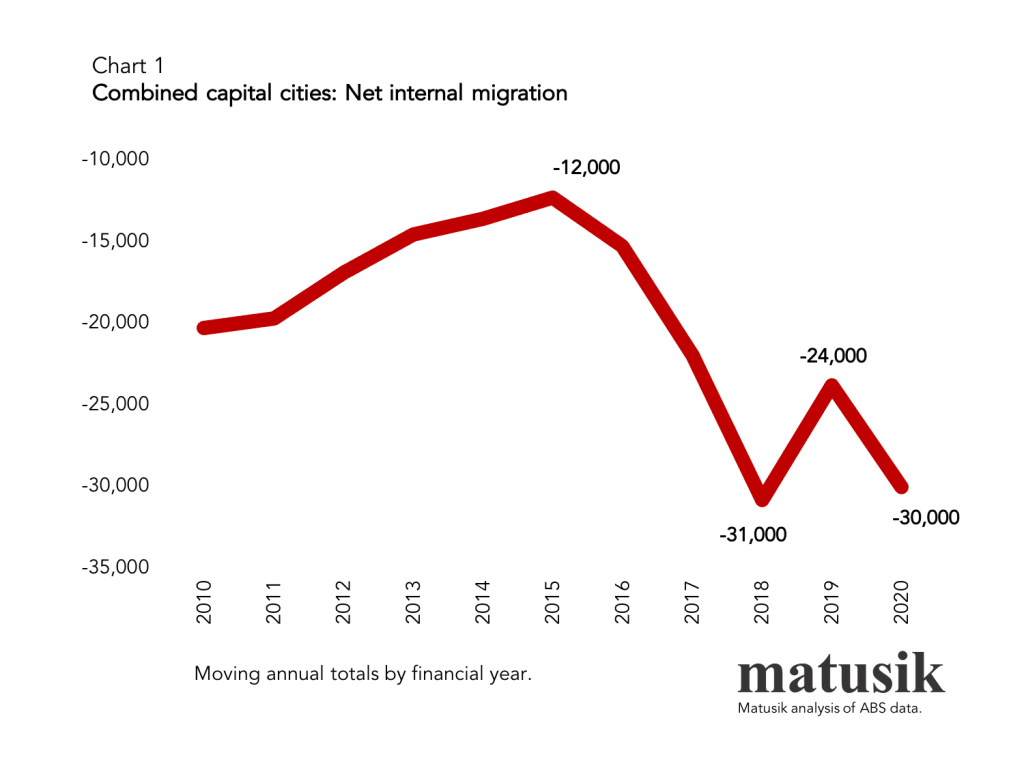 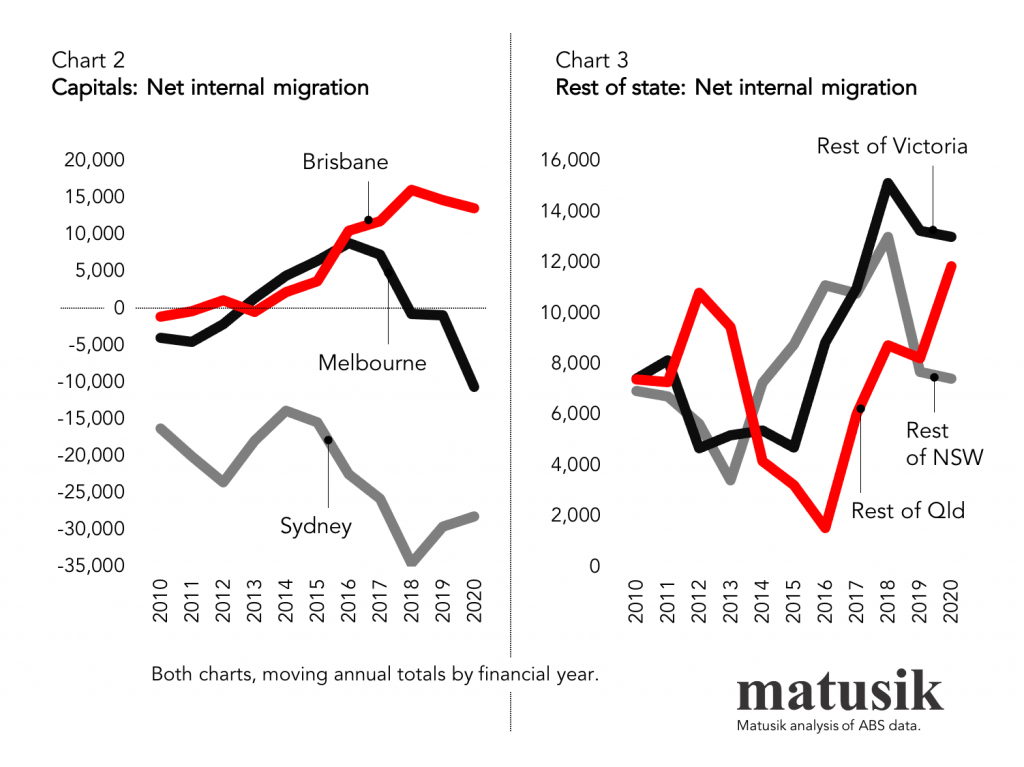 The talking heads have been making way too much of Covid19 and its ‘surprise’ impact on capital city populations.   Chart 1 shows that the combined capital cities have been losing population to regional locations for some time.

Chart 2 shows that Brisbane continues to gain internal migrants, whilst Melbourne has been losing internal population growth for years and Sydney, right now, appears to be seeing less people leave the city.

Chart 3 illustrates that the regions in NSW, Victoria and Queensland have all been gaining internal population growth for a considerable time.

It is important to note that the Gold and Sunshine Coasts in Queensland; Newcastle and Wollongong in NSW and Ballarat and Bendigo in Victoria are regarded as regions.

One could debate that these locations are within a daily commute of the capitals and maybe shouldn’t be counted as a ‘region’, like say Mackay or Cairns.

When you include these outer conurbations in the capital city counts, the wider capital cities – despite Covid19 – continue to dominate internal migration movements in Australia.

Now lets look at the tables.

Table 1 shows that most people that leave either Sydney or Melbourne go to a regional location in NSW or Victoria.  Most new internal residents arriving in Brisbane come from intrastate.  Across all three east coast capitals experience considerable internal population movement between capitals cities too.

Table 2 looks at internal migration across the rest of NSW, Victoria and Qld.  Regional NSW attracts considerable internal population growth from SEQld – largely in northern NSW – as well as from Sydney and Canberra.  Most of Victoria’s regional internal growth comes from Melbourne.  Whilst Qld’s regional markets attract residents from Brisbane, regional NSW and from Sydney and Melbourne.

Regional universities used to help achieve this, but maybe with less overseas students in our capital city colleges – due to Covid travel restrictions and the current China fracas – more regional youngsters might opt to undertake their tertiary education in the big smoke.

Plus, unlike many of the regions, there is plenty of student styled digs to rent in our inner cities.

My final comments are that Covid19 is likely to see more people consider a life outside of the capital city.  But this has been a long term trend.

Most are really moving to the outer conurbation – on the edges of what the official statistics currently define a ‘capital city’ – where housing is more affordable and better suits our demographic, and importantly, psychological makeup.

We are suburban people.  We like a nexus to the ground; we want to own our own bit of dirt and we appear to be prepared to accept the commute (and distance) to get it.