I have posted several missives in recent months about regional population growth.

These communiques claimed that the move from the capital cities to regional locales due to Covid-19 is a short-term occurrence and are even overstated when you have a closer look.

It seems that others share that view too, with some calling the current trend a “sugar hit to the regions”.

A colleague has also suggested that the real reason why the regions have seen an increase in net internal migration over the last 12 months is because people who would normally have moved to the capital cities are (for now) staying put.

Interesting.  And the ABS statistics suggest that this is true.

Net internal migration to the regions (as defined by the ABS as those areas outside of their definitions for the capital cities) was 36,500 last year, which was up 14,000 or 62% on the year before.

Yet net migration is worked out by comparing those that move into an area against those that leave the same place during the same time frame.

Charts 1 and 2 below outline what is really happening across regional Australia. 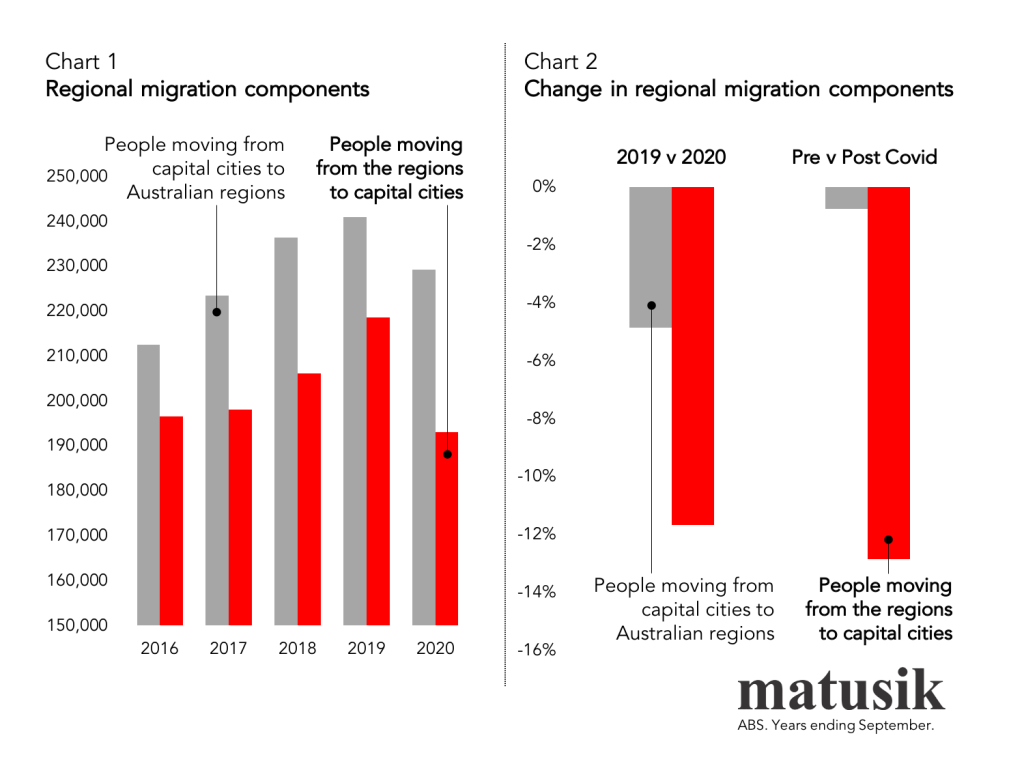 Firstly, that the overall level of arrivals to, and departures from, regional Australia has fallen over the last 12 months.  This is because there are very few overseas migrants arriving in Australia at present.  This impacts both the capital cities and regional Australia.

Chart 2 shows that this trend increased during 2020 as certain Australian States implemented increasingly draconian covid-related lockdowns and other restrictions.

Some 70% of Australians live in the six main cities.

I think that is will not change because of the pandemic.

In short, the capital cities are where the majority of the jobs and services that people want are located.

Many regional residents have put their move to the capital cities on hold last year, and as a result, I believe we will see a big snapback to positive net migration to the capitals (and their surrounding conurbations) once the covid vaccines roll out and travel-related restrictions cease.

Unless major monies are spent on regional infrastructure and this quantum rivals the amounts being spent in the capitals, any population movement to regional Australia will be modest at best.

And the decision makers must think that too.

Ask yourself, if we were truly going to see a regional resurgence, then why is almost all the existing, and proposed, infrastructure projects focused on the major capitals and mainly in the inner city areas within those cities.

Regional Australia will remain exactly that, provincial at best.