I am showing my age but when I read about rapidly rising house prices, I ­think here we go again, more BS about a housing bubble.

In recent months house price rises have paralleled those that occurred in the late 1980s – the monthly rise of 2.8% in March was the strongest jump in house prices we have seen since October 1988 – and there are suggestions that house prices could rise by as much as 20% this year alone.

Whilst periods of rapid house price escalation essentially come down to the forces of supply and demand – albeit with varying quantities of exuberance – the precise details of these housing booms are not the same.

In the late 1990s/early 2000s the mining boom and strong investor demand drove up prices.  Many regional towns overshot.  The changes made to the capital gains tax regime (and the introduction of FHOG) at the time poured petrol onto the fire.

Monies that usually would have been spent on going out and travel, especially overseas trips, has now been focused on the home.  Given owner occupiers are the driving force, demand is strongest for detached houses and smaller infill products rather than high rise apartments.

The most recent stats suggest that owner-occupier loans made up more than three-quarters of all home loans approved.  There were more than 16,000 first-home buyer loans approved in February this year compared to about 7,000 during the same month 5 years ago.

First-home buyers have been assisted by various federal and state government initiatives plus the Bank of Mum and Dad.  Home-owning parents are helping their kids bridge deposit gaps.  It is ­estimated that the average value of such gifts/loans is now close to $90,000.

Covid also saw the implementation of the HomeBuilder incentive which – despite low population growth – brought forward the demand for new builds whilst exhausting new land supply.

Covid related travel restrictions has also placed a brake on the amount of resale stock usually on offer, with national listings currently down 17% on this time last year.

An increase in supply and/or a reduction in demand does mitigate price growth.

Some are now calling that house prices fall next year with the most common denominator being an increase in supply.

According to UBS some 40% of JobKeeper recipients own a home and their recent survey suggests that 70% these homeowners plan to sell their home in the next 12 months.  If this happens it would double the number of homes for sale which would take some heat out of the housing market.

Demand could also be cooled by tightening lending criteria or rising costs.

However, housing markets aren’t uniform because people have strong preferences about where they want to live and/or what type of home they want to live in.  Many desirable areas are effectively built out, short of the intrusion of high-rise and in-fill developments to which many residents object.  Many still prize detached housing over an attached dwelling. Releasing more land in the outer burbs doesn’t really affect the price of homes in the inner or middle-ring suburbs.  More downtown apartments rarely results in nearby house values falling.

In addition, once house prices have risen, there’s a serious policy dilemma for governments.  For those in the market, particularly recent purchasers, there’s a lot riding on prices not falling.  Plus, there are more home owners than ­potential purchasers or renters.

For this reason, neither the federal nor state governments are likely to introduce any policies, such as new housing taxes, that could push prices (or rents) down significantly.  This is especially the case in the lead up to a federal election.

For mine, New Zealand’s raft of new taxes on investors won’t be repeated here and they are likely to be withdrawn there soon too.  Paul Keating (late 1980s) Mark 2.

Moreover, I believe that the Australian government will lift housing demand as soon as possible by resuming immigration and its initial return is likely to be higher than recent intakes.

So, what actually happened back in 1988?

The chart below suggests than past busts have really been slumps.

For now, all signals suggest that national residential property prices are likely to keep rising for the rest of this year.

Forecasting further out is harder, except to say the longer the current exuberance is allowed to continue, the more likely we will see house prices fall next year.

More pertinently I believe that once this current boom runs its course, we are likely to see a long period of price stagnation.  I am thinking a decade not years. 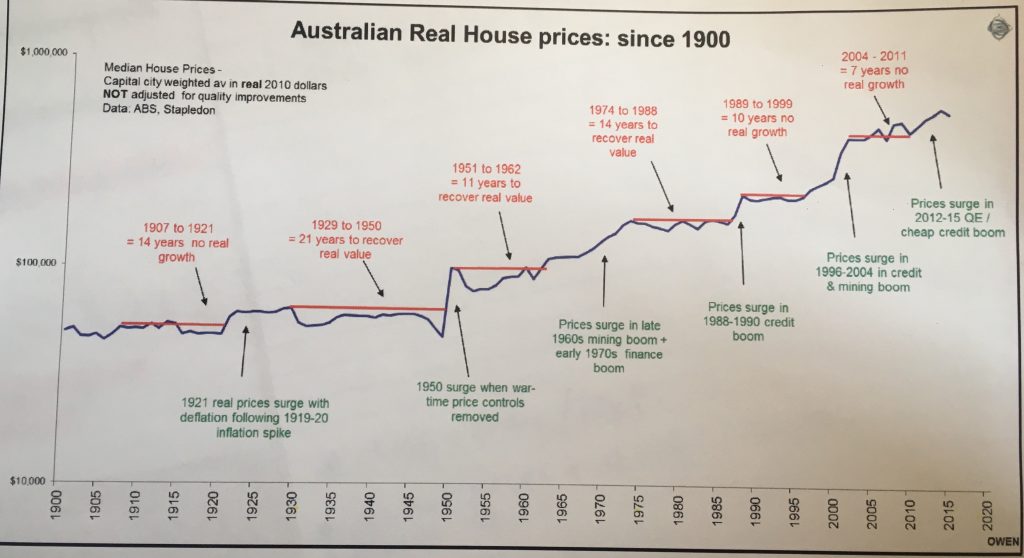