Another common question asked of me during my last Master Class workshop session was “When will overseas migration return?”.

The latest federal budget suggests that positive net overseas migration is forecast to return in fiscal 2023.

The current net immigration forecast is as follows:

It is interesting that the federal bean counters are responsible for Australia’s population policy rather than a more rounded think tank and policy apparatus.

As a result, the business lobby gets the most attention when it comes to our future population count and demographic profile.

The thinking goes something like this – we need more customers to sell to; lower labour costs (wages) and lower taxes.  The bottom line is the perceived need to maintain Australia’s headline economic growth rate and the Commonwealth’s projected tax revenues.

I increasingly think we should reassess our immigration intake.  There is a lot of evidence to suggest that we are worse off across a range of indicators as a result of our high immigration settings over the past 15 years.

Mass immigration since the GFC (revisit chart 1) has seen:

Based on current long term immigration projections, some 10 million people more will live in Australia within the next 20 years.  That’s nearly 8 million more cars if established trends continue.  See chart 2. 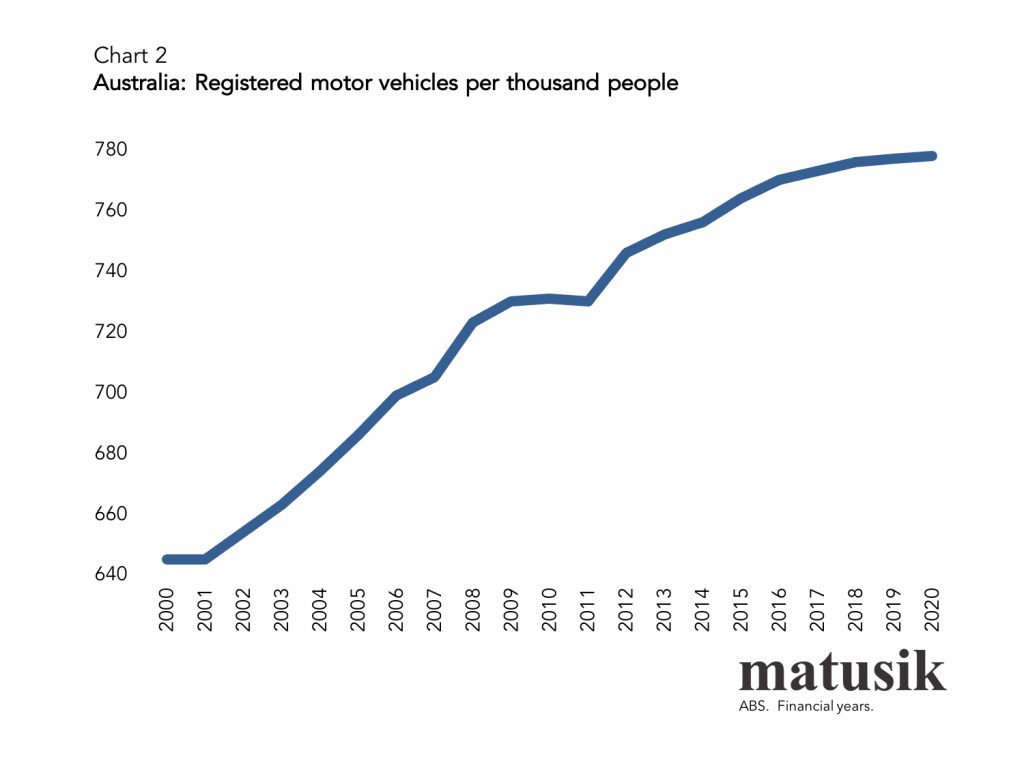 We would see little change in our population or motor vehicle count between now and 2041 if we stopped immigration altogether.

This of course is going too far, but we do need to think about what we are trying to really achieve with our recent mass immigration mindset.  Illusorily economic growth and questionable tax relief surely isn’t enough.

Sadly pigs don’t fly, so we are likely to see immigration numbers leap again once we open our borders.  Vaccinations are a key benchmark here, but also playing a large factor – if you ask me – will be our collective exhaustion.  There is only so much Covid palaver one can bear.

The housing construction industry will be doing it much tougher in coming years, with some builders already facing potential bankruptcy as costs rise beyond their fixed price building contracts.

The building industry and their rent seeking lobbyists will want another HomeBuilder incentive and/or higher population growth.  The federal government – especially in the lead up to an election – will be keen to please. Big Australia is easier on the wallet (over the short term at least) than another cash handout.  The first tick for a return to mass immigration.

Of course, us plebs are also somewhat to blame.  The spin-doctors will be telling us that we face higher taxes unless we get more bums on seats to help share the load.  Many workers will agree.  Tick number three.

And the recent rendition of the Australian Intergenerational Report adds further grist to the mill.  Tick number four, five and six.

We could continue the tick-a-thon but your get the drift.

As a result, I reckon the latest immigration forecasts are both light and somewhat delayed.  I expect that we will go back to an annual immigration intake well in excess of 250,000 sooner that forecast and for many years.