I have undertaken a lot of consultancy work on the Gold Coast over the past three decades – yes, I have been doing this stuff for that long! – and as part of recent project advice commissions we have been asked about the long term housing cycle and the interplay between Sydney and Gold Coast dwelling prices.

So, this post I unpack the past and give my two bobs worth on what I think will happened on the Gold Coast over this property cycle.

Charts 1 and 2 show that the Gold Coast housing market is a cyclical one.

At present detached house values are rising by 20% per annum and attached dwelling values are increasing by 10% on a year to year basis. 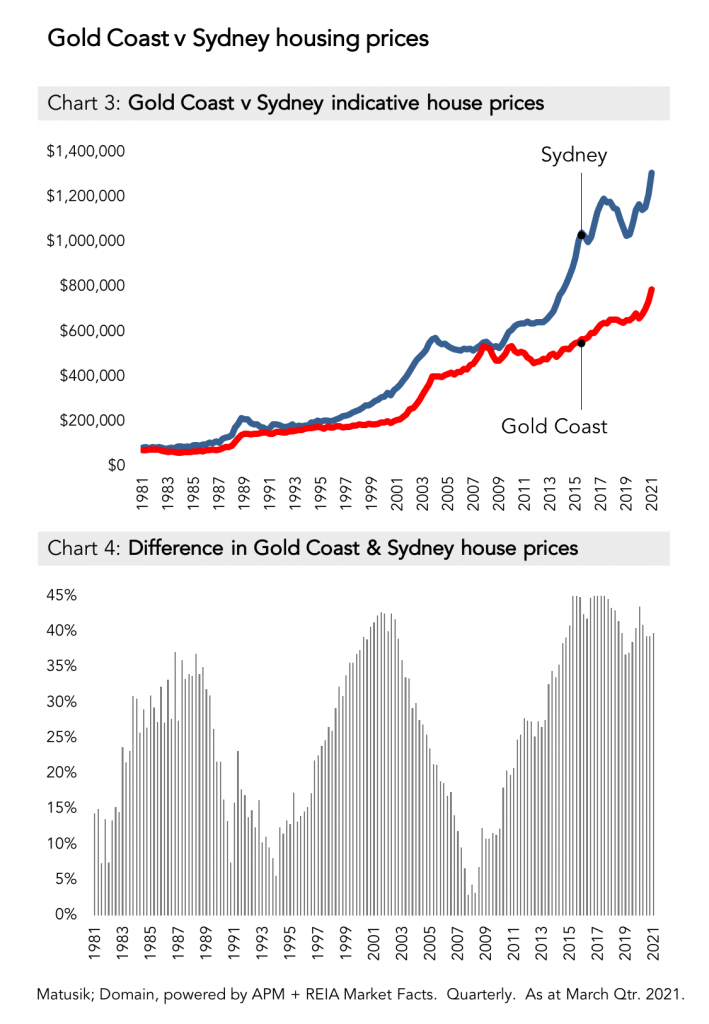 Charts 3 and 4 shows that there was little difference between housing values in Sydney and on the Gold Coast in the mid-1990s and in the late-2000s.

At present the difference in Sydney’s indicative house price is 40% more expense than on the Gold Coast.

Whilst the GFC is somewhat to blame for the Gold Coast’s poorer performance in recent years and Sydney’s price growth has been lifted by Australia’s elevated overseas migration intake over the last ten years, history suggests when the right circumstances present themselves, Gold Coast housing prices come close to matching those being achieved in Sydney.

It would appear that the Gold Coast is at the starting phase of another housing upswing.

I believe that a similar growth curve as to what was experienced between 2001 and 2008 on the Gold Coast is likely to transpire over the course of the current housing cycle.

In addition, I think that due to reoccurring Covid19-related events interstate; coupled with the Gold Coast’s scaled up urban size; quality infrastructure provision and future housing market parameters (tight supply) the Gold Coast is likely to see its dwelling prices start to rematch Sydney’s over this course of this current housing cycle.