I usually don’t post about population stuff until December each year as I like to use the stats for the full financial year, but the recent ABS release warrants some commentary as it represents the first full year of Covid-affected population growth.

And affected it was.

Australia’s population has stalled, standing at around 25.7 million as at the end of March this year.  This was an increase of just 35,700 over the past twelve months – the lowest growth rate since our population declined in 1916, due to World War I.

In terms of natural increase – births outweighed deaths – by 131,000 – but this was offset by substantially more people leaving to go overseas than coming into Australia.  Net overseas migration (NOM) was -95,300 for the 12 months ending March 2021.  NOM is historically positive, and a major driver of Australia’s population growth. 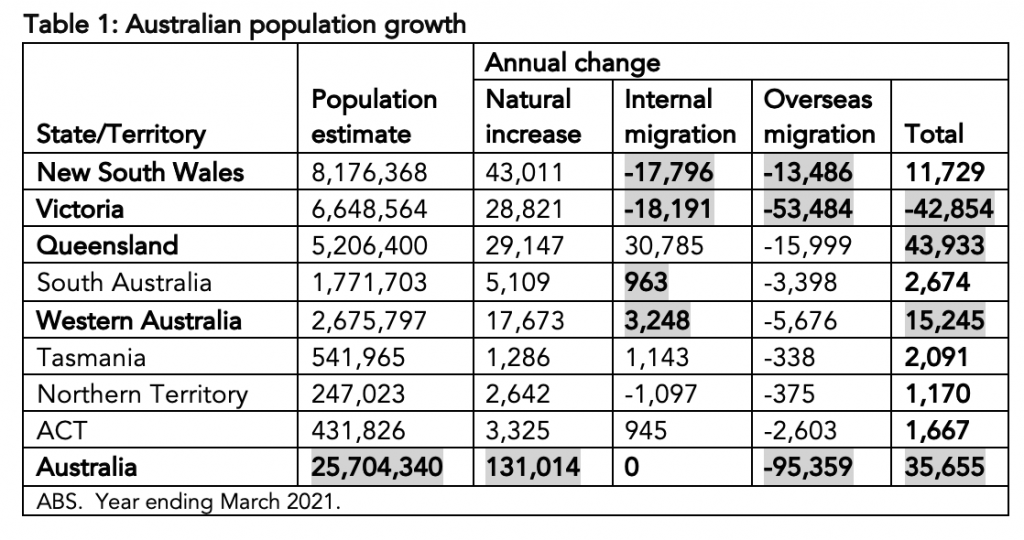 New South Wales continued to eke out small population increases, as overseas arrivals were positive – due to taking the largest share of returned travellers into quarantine – yet NSW’s NOM net result was negative, as more people left than arrived.  Interstate migration remained negative, but this is not a new trend for NSW, as it has long been the case pre-Covid.

Victoria’s population declined substantially over the last 12 months.  The previous five years, Victoria had been the fastest growing state or territory in Australia.  Last year’s result was the largest absolute population decline Victoria has ever had.  As a percentage, it ranks third, behind 1916 and 1915.  Most of this recent decline is due to negative NOM (-53,500) but also strong interstate migration loss (-18,000).  Being the most lock downed location in the world has no doubt had an impact.

Queensland accounted for more than 100% of the national population growth last year; and don’t the local talking heads like to tell everyone about it.  NOM there was negative too, but the Sunshine State made up for it with high internal migration – but this is not a new trend.  Net interstate migration was higher than in previous years – with few more coming in and less leaving the state – but it doesn’t stand out that much in a historical perspective.  See chart 1. 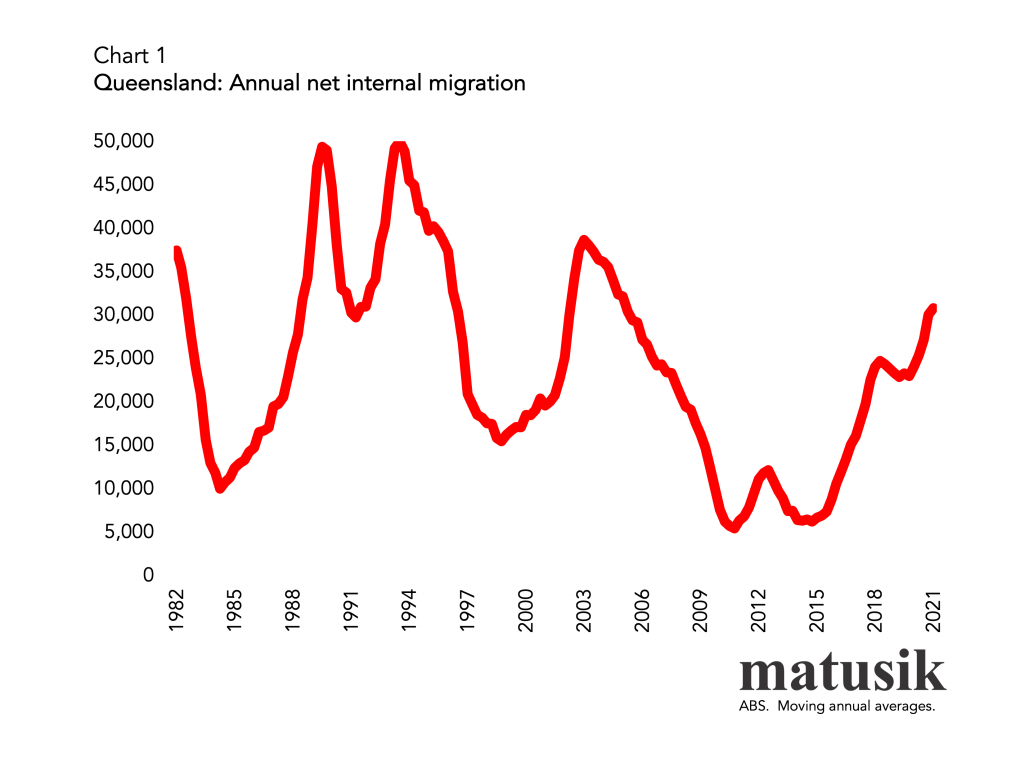 Western Australia is also growing strongly. The state with the toughest border controls still managed to attract more net internal migrants last year since 2012.  A hot iron ore price (up until recently) meant more people come in and less leaving, offsetting the loss of the overseas migrants, and adding to natural increase there.  Yet how long this can last is questionable.

One thing which is clear from these figures, is that the ‘Covid-Zero’ states which have not been heavily affected by the virus and associated lockdowns, are growing, while the most affected states are declining or stable in population.

There is a clear movement out of New South Wales and Victoria into Queensland and Western Australia whilst South Australia has turned the tables from losing population interstate, to a slight gain.

Population growth is expected to recover once international borders are re-opened, which, as at the last guidance, will be from mid-2022.  Immigration accounted for two-third of Australia’s population growth prior to the pandemic and the federal government appears committed to resuming past NOM flows.

Current Treasury projections has Australia’s annual net immigration back to 235,000 people by fiscal 2024 and the latest Intergenerational Report (IGR) suggests that NOM – again averaging 235,000 people per year – will apply for decades to come.

But one must wonder – especially now that Covid has given us cause for pause – if lifting immigration back to its previous levels is the wise thing to do.

For mine, the first and foremost goal of public policy should be to protect the welfare of existing citizens and not make a problem worse.

‘Big Australia’ immigration, on most fronts, violates this principle.

My post about Big Australia earlier this year outlined 10 reasons for a rethink when it comes to high population growth rates.

And if that list wasn’t compelling enough I can now add an eleventh reason – and this one is likely to resonate with many – being that recent work by the IMF found that a lower rate of population growth helps reduce interest rates.

Since the GFC, lower population growth in the relevant countries has helped reduce their real interest rates by 40%.