When thinking about a missive I often quiz myself about the topic.  ‘Questions to myself’ so to speak.

I also think that Q+A webinars and presentations work much better than the typical ‘I deliver, you listen’ approach.

Anyhow, here are five questions and my answers to the current APRA move in

attempt to slow the housing market.

Q1:  Will Australian Prudential Regulation Authority’s lift in the minimum buffer of 3% (instead of the previous 2.5%) above a mortgage loan rate ready slow to housing market?  It seems like a very small move.

Official interest rates have not increased.  Just the buffer.  It also assumes – which is a big assumption – that loan applications are honest when it comes to such things as income and liabilities.

APRA’s new rule is also not active until November this year – and pre-­approved loans will not be reassessed at the higher buffer rate – so one can expect a rush in real estate activity and new home approvals this month.

This is already evident by the high auction clearance rates across the country last weekend.

APRA estimates that this new buffer would reduce the borrowing capacity of a typical ­applicant by 5%, dropping the average Australian household’s borrowing by $35,000.

Based on the big four banks, their variable mortgage rate currently averages 2.65%, so the minimum new ‘stress test’ rate would be 5.65% from November, up from the current 5.15%.

Yet Australian house prices, on average, have risen by $100,000 between December 2020 and June this year, and are set to potentially rise by more than double this amount between the 1st of July and the end of calendar 2021.

These rises are locked in.

Also, the new buffer rule also only applied to bank loans and not non-bank lenders.

Since the start of the pandemic the share of home loans to non-bank lenders has risen from 6% to 11%.

The irony is that APRA’s current move has probably added more heat to the housing market rather than actually cooling it.

Q2:  Surely most are honest these days when applying for a home loan?

Not really.  We too have embellished our earnings and lowballed our expenses in our early years, and I am sure that many others do to.

According to recent research by UBS some 41% of new home loan applications during fiscal 2021 were ‘not completely factually correct’.  This is up from 3% on last year and has risen from 27% in 2015.

Perhaps the most shocking thing in the UBS survey is that an astounding 69% of people with ‘liar loans’ in the broker channel claimed that it was the broker that suggested that they over/underrepresent to be able to get approved.  This is up by over 20% when compared to 2020.

More worrying, if you ask me, is that 22% of people with liar loans said it was their banker that suggested that they should be less than fully truthful on their application.

Q3.  It this ‘loan lying’ a capital city thing or more widespread?

If you look at where the properties that are purchased with a liar loan are located, there has been a steep increase in regional and rural properties – some 57% during financial 2021 versus 41% in 2020 – which I guess can be explained by the number of people moving away from the capital cities because of the pandemic.

In conclusion, it seems like the recent strong house price growth is forcing people to be less truthful on their mortgage applications.

Q4.  Do you think the housing market needs slowing down?

An effective housing policy does not exist in Australia.  If we had one, then the answer would be no as the market would rise and slow accordingly.

But what we have is politics instead of policy.

The list of political (vote getting) interferences with the housing are a mile long. These are well known and have been written about endlessly in inquiries/reports and include:

And we have now more emotion in the mix than usual.  This has been caused by the pandemic.

To most Aussies our homes are everything.  We now work there, as well as sleep, eat and watch TV there.  Many of us can’t (or won’t) travel or go out much – we’re stuck at home, at least for a while longer.

It’s no wonder the market has got emotional.

I wrote as part of a Covid caveat in my consultancy work in the early days of the pandemic….

…. residential property is unlikely to be affected anywhere near as much as other property classes.  People will always need somewhere to live, and homes are the true “safe haven” in the current environment.

This sentiment may also loiter after this emergency passes.  It may even strengthen the longer the virus remains unrestrained.

But seriously folks the current housing boom is mostly due to the lowest interest rates in history, which of course is also due to the pandemic.   Despite the rise in house prices and household debt, overall repayments have fallen.

But I digress, back to the question.

Strong price growth and over the top price expectations can lead to over-exuberance in housing markets.

In practice, however, it is difficult to determine if housing prices are over-valued in real time.

On one hand owner resident models – which compare the relative costs of owning versus renting a property, and so consider a range of factors including the decline in interest rates – suggest housing prices remain broadly in line with fundamentals.

But on the other hand, investment metrics of over-valuation such as price-to-rent and price-to-income ratios have increased markedly, suggesting that in most Australian cities housing values are currently overpriced.  See chart 1. 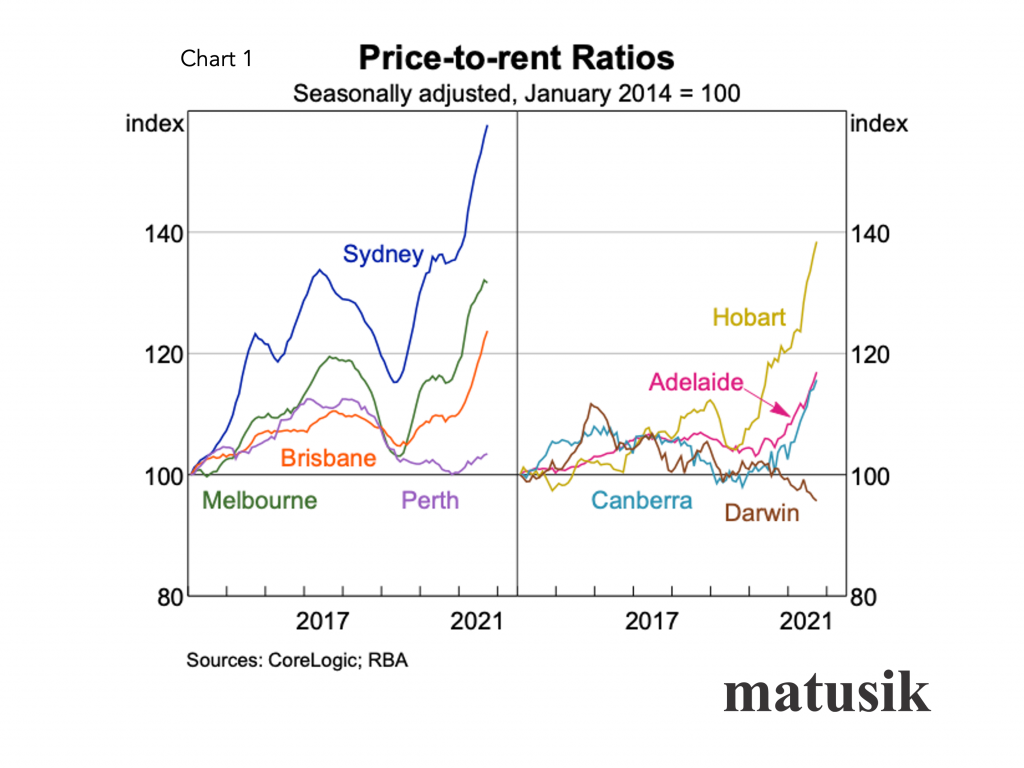 But history suggests, unless we get a black swan event, then housing values are likely to plateau after this current surge.

Note that I didn’t say ‘another’ black swan event, as I believe that Covid-19 was a grey rhino not a black swan as many suggest.

I think the solution – if we really do want to slow the housing market rather than give it just lip service – is to increase home loan rates.

This may happen to some extent without a move from the RBA as banks may need to lift them as a large part of their monies comes from overseas these days, but to really have some bite, and wide scale impact, the official cash rate needs to rise.

I think one of the more foolish things I have heard of late – well apart from “Queensland hospitals are for Queenslanders” – is the RBA ‘promising’ that “interest rates won’t change until 2024”.

I think they will rise, and the first increase will be in 2022, post a federal election.

It won’t take much to slow the housing market if actual home loan rates increase (rather than an increase in a loan buffer) as there is little wage growth and when you investigate our household savings rate – see chart 2 – we really don’t have much saved for a rainy day. 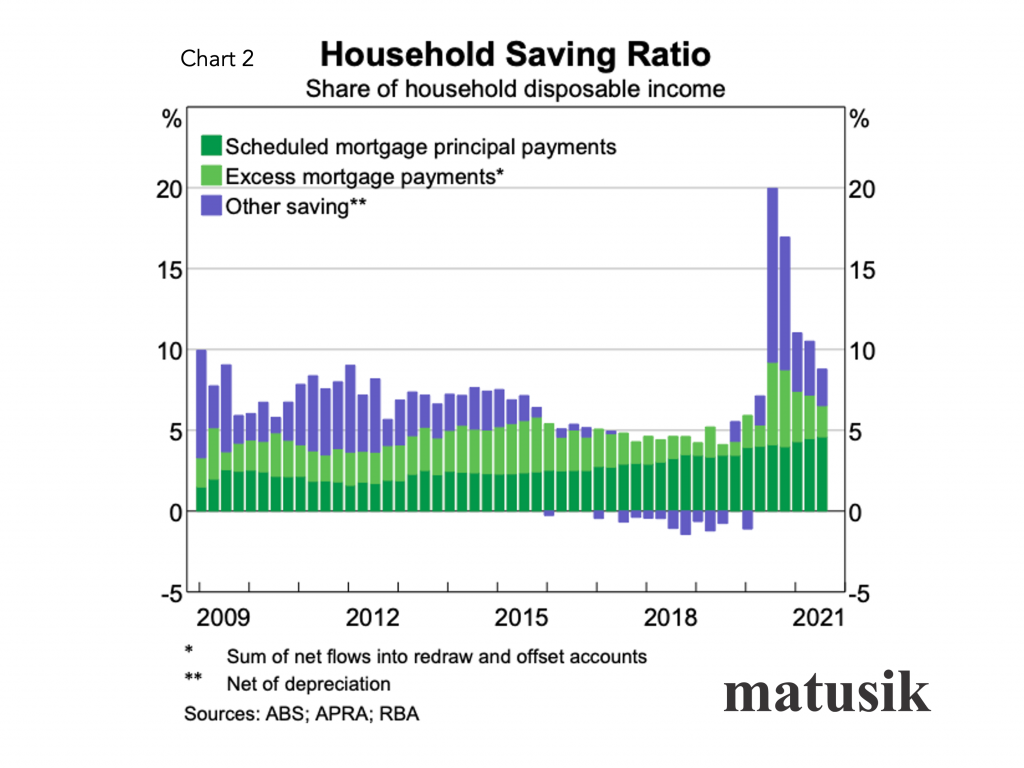 The new 3% APRA buffer is useful in that is informs us – well me anyhow – where interest rates are likely to end of in the next couple of years.

At present the cheapest home loan you can get now is about 2%, that will be 5% in the next three to five years.

The best buffer is likely to be an honest one.