So, who do you think will win the federal election?  ScoMo or Albo?

Why I am asked such things is a little beyond me.

My standard answer is that federal elections are won by individual seats, and you should be voting for your local candidate not the current head of the two major parties and for what is worth, on a seat-by-seat basis, it seems (as at mid-February) that the election result is too close to call.

Having now stated my proviso, for mine, federal election voting decisions are based on economics and not all the other stuff that Canberra or the press bubble babble on about.

Well, that has been the case, again in my opinion, since the early 2000s, when Australia (and much of the western world is seems) became an economy first rather than a community or society.  Money became the measure, not the other important stuff.

It’s the economy, stupid after all.

Sure, certain events, sledges or even legislation are often used as a wedge, but their use is more often than not to distract the electorate from poor economic news or trends.  As a case in point witness the timing of the Religious Discrimination Bill.

Our chart this week shows what I like to call the Pain Index.  It is the combination of Australia’s headline inflation rate and the countries ‘unemployed’.

Typically, since 2000, when the Pain Index is high or rising, we have seen a change in government.

The exception to this rule was in late 2007 when Labor won.  Whilst there was a lot of political noise at the time, in short, a major reason for the change was that John Howard overstayed his welcome.

Our chart suggests two things, one is that the Liberal’s hold on things economic appear to be on the slide.  This is especially the case as wage growth is unlikely to match rising inflation.

Paying over 200 cents per litre for petrol also doesn’t help and if you haven’t paid for your annual insurance premiums of late, you wait, it won’t be pretty.   And then of course there is greenflation.

And second, is that we might see an early election.  It might be best to have the poll before economic things side further.

Segueing into the housing market, for mine, 2022 is a year of two halves and the halfway point is likely to be determined by when the federal election is held.

Before the federal poll things should remain loose but after it is done and dusted (and regardless of the outcome) the screws should start to be tightened.  Up goes interest rates and most handouts are likely to stop. 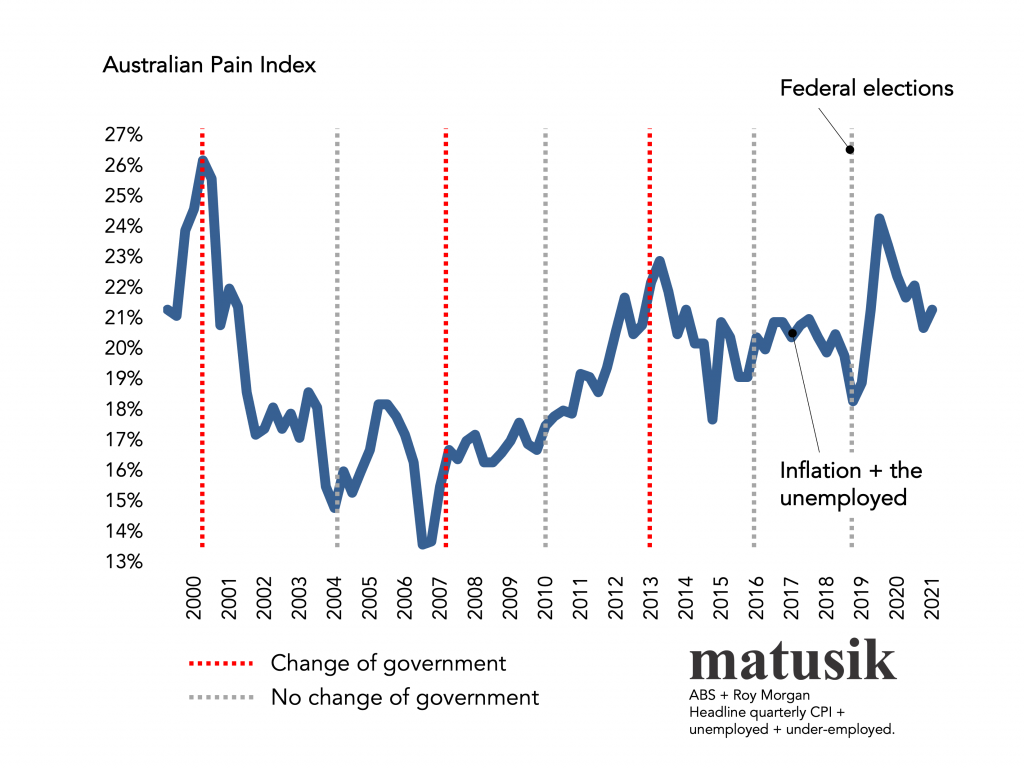 PS. Interestingly – well to me anyhow – is that since the 2007 election the proportion of votes to the ‘other’ parties has been increasing – from 15% in 2007 to 25% in 2019.  This coincides with a rise in the Pain Index and also the general trend downwards in confidence (revisit last week’s post).

Grace and Brittany, and rightly so, have definitely thrown a spanner in the works this time around.  Me thinks the ‘other’ parties will get close to third of the vote this time around.  So it will pay to understand where your local candidate’s preferences go.

But regardless of whatever distractions are thrown up in coming months, it really is all about the economy, stupid!

PPS.  Annual insurance premiums are a good bellwether as to where general inflation is heading.