The flooding rain across the eastern seaboard will have a big impact.

Economically, past major floods have seen big falls on the financial front.

It is expected that the current deluge could see between $1b and $1.5b wiped off the March GDP figures.  That is more than twice the impact Covid (to date) has had on the Australian economy!

Coupled with the Omicron impact plus the Ukrainian situation, I would be surprised if Australia doesn’t enter a recession (two quarters of negative GDP growth) over the first half of 2022.  Well, it might not get there officially, but it sure will feel like it.  Paying over $2 per litre for petrol is only the start of things to come.

Inflation will escalate, shortages will worsen, and somewhat ironically interest rates will rise too.  And we have to face a federal election on top of this misery.

Of course, the share market is being hit and so too will the housing market.

This post holds ten charts.  I couldn’t help myself.  And these charts look at the impact the 2011 Brisbane flood had on the local housing market.  Most of these charts are at the end of the post, as way of reference.  Chart 4 is our feature image this post and is located in the blurb.

Before we start it is also important to remember that the Brisbane housing market was in the downturn phase of property cycle when the January 2011 flood hit.  In early 2022 the Brisbane cycle is near the top of upswing.

Many will be most interested in the impact on housing prices and chart 4 below shows that it took 33 months (or just under three years) for Brisbane house prices to recover to the same level they were in late December 2010.

Those suburbs not affected by rising flood waters took 21 months, on average, to regain pre-flood price points.  Whilst it took, again on average, 54 months (4.5 years) of the flooded suburbs to recover.

The 2011 also saw an increase in the properties for sale, as some decided to sell rather than stay put and rebuild.  In comparison listings are in decline today.  See chart 5.

As one might expect construction costs rose in both 2011 and 2012, but only mildly when compared to current escalations.  See chart 7.  Yet general inflation in Brisbane fell in the years after the 2011 flood.  Today CPI is surging.  See chart 8.

Chart 9 shows that there was an uplift in local job creation after the 2011 flood and Chart 10 displays that Brisbane’s annual population growth slowed substantially during fiscal 2011 and 2012.

To many the 2011 Brisbane flood was seen as a ‘stuff up’ especially when it came to the timing of the dam releases.  Not much might have changed once the 2022 deluge is dissected.  But this time around the flood impact was wider than 2011 and from what I can tell so far, the Wivenhoe Dam management had a much smaller detrimental impact on the extent and severity of the current inundation.

So, looking forward I think the following is likely.

Brisbane’s housing market has now peaked.  It is likely to enter a mild downturn.  Sales volumes should start to fall.  Listings most likely increase.

Price points, in general across the Brisbane region, are now likely to stagnant and they are likely to remain flat for at least three but more likely five years.

There might be some price growth left in the ‘dry’ suburbs, but this will be mild and only short lived.  Think maybe 5% max and only to the next six to twelve months.

Price falls of over 10%, again in general, in flooded areas are probable.  It will take several years to prices in the flooded areas to regain their late 2021 values.

Dwelling approvals will tank too, especially apartments.  The flood will add further financial pain to many Australian home builders.  Building costs and CPI will surge and stay elevated for some time.  Years maybe.

Yet if the past is any indication, then local job creation will get a further boost – revisit chart 9 – and investment opportunities especially in flooded areas, and particularly regarding properties with medium to long-term development potential, will present themselves.

One must also remember that the Brisbane and Bremer Rivers flood on a regular basis.

Since 1824, when records where first collected, both river catchments have flooded 38 times.  There is a chance of a flood every fifth year.  This means that there is 20% chance that each river could flood each year.

Of course, many of these floods are what the hydrologists label ‘moderate’ and ‘minor’ and hence often have little lasting impact.

So, there is 6% chance that the Brisbane River could have a major flood each year and this chance rises to 13% for the Bremer.

I don’t know about you but spending monies on the likes of the 2032 Olympics is like dashing around in a new sports car, whilst the mortgage and utility bills remain overdue. 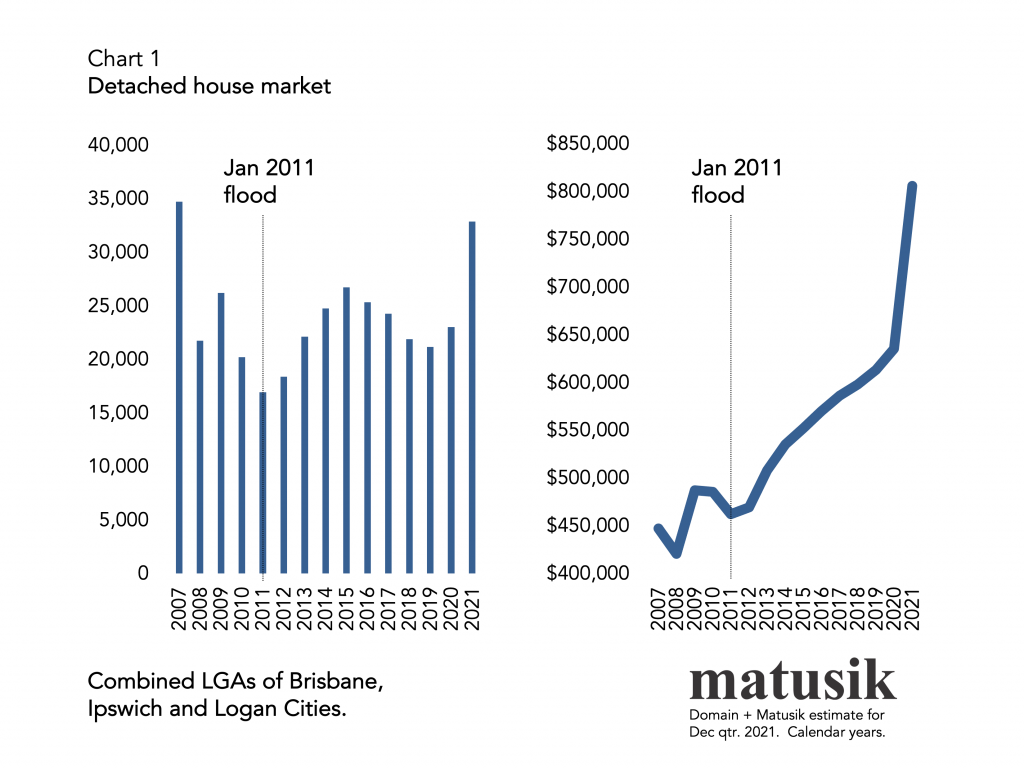 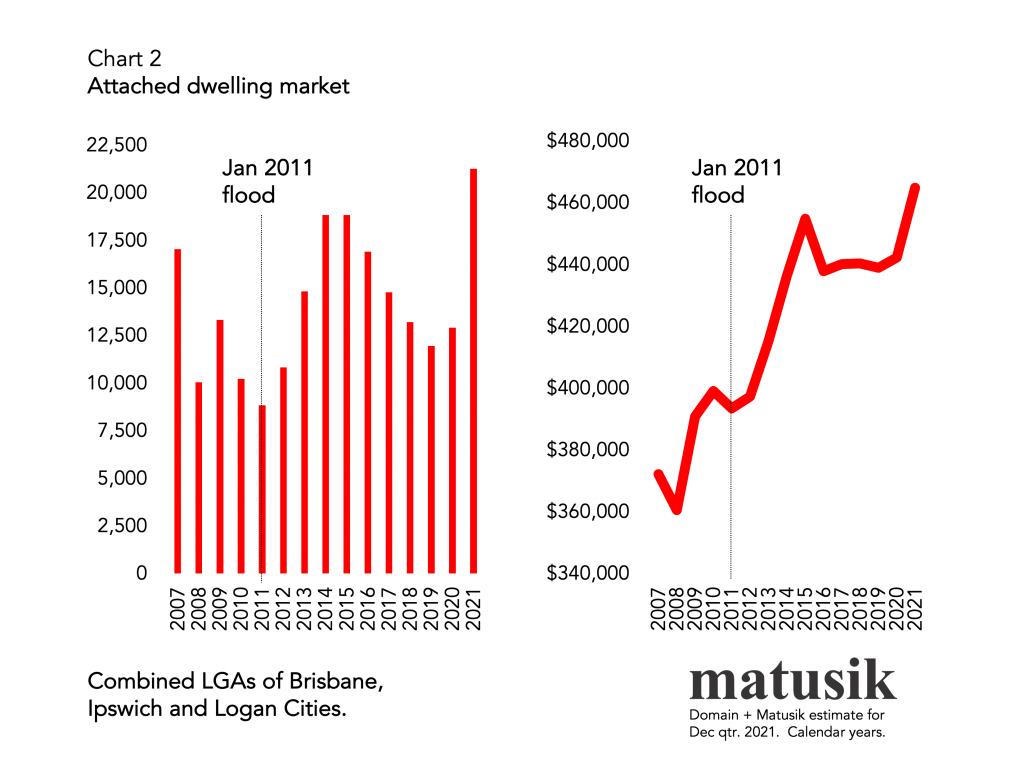 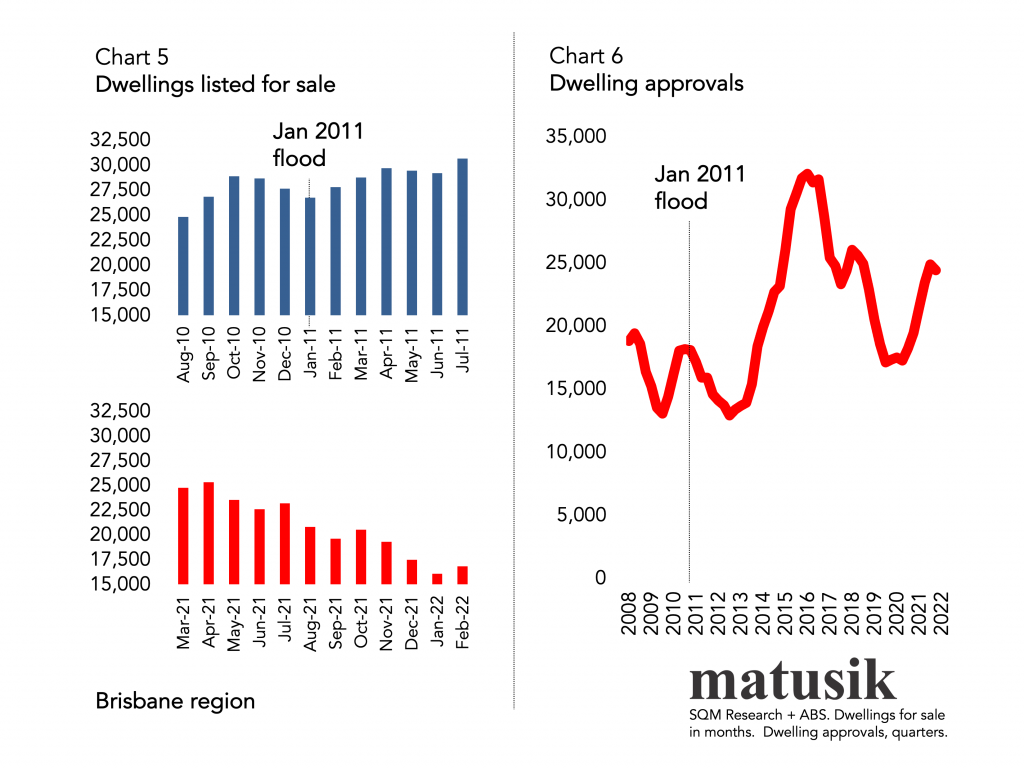 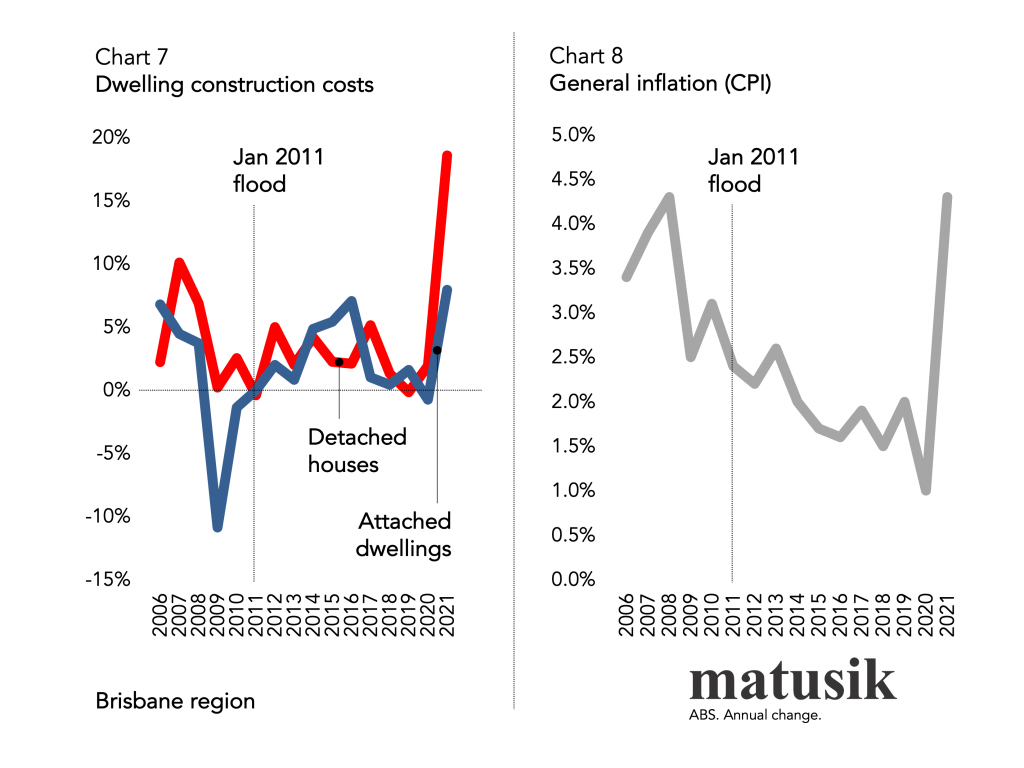 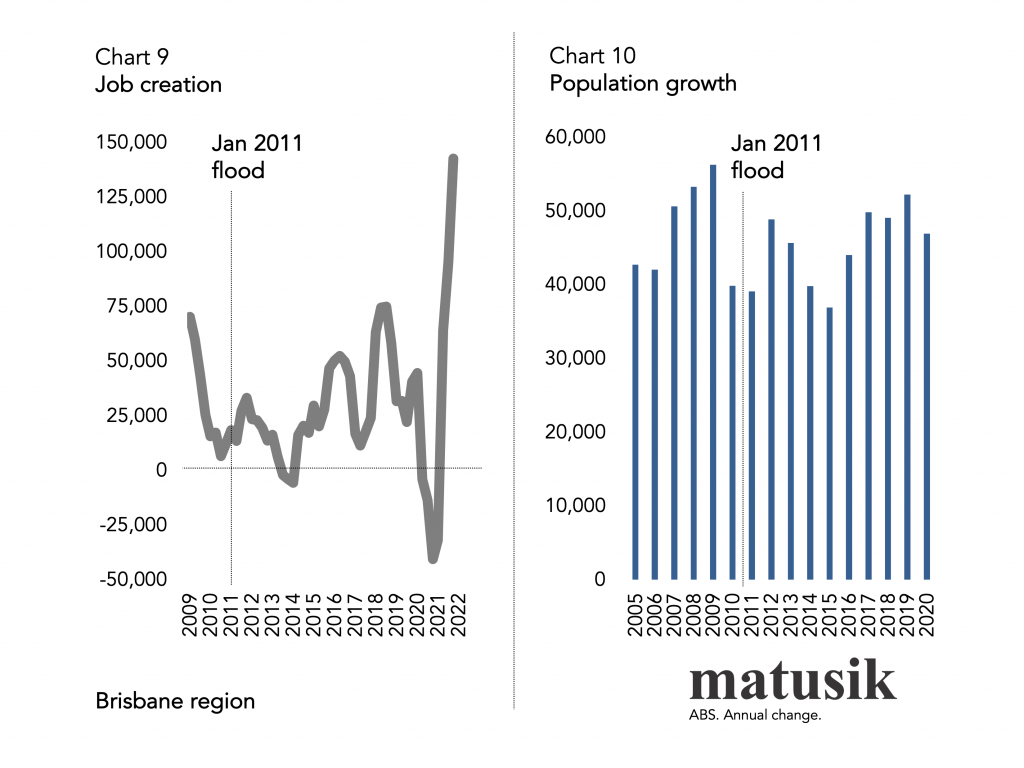