Housing affordability is shaping up as a key election issue and in a bid to bridge the widening gap to enter the market the federal government is expanding its deposit guarantee scheme.

But while the doubling of its Home Guarantee Scheme to 50,000 places is aimed at making it easier for first home buyers to get into the property market there are concerns it will do little to stem affordability issues.

Plus, the National Housing Finance and Investment Corporation cap has been expanded by $2 billion to a combined $5.5 billion which is estimated to equate to an additional 27,000 dwellings.

When quizzed on the subject, Scott Morrison, reiterated the Coalition standard line about buying a house is the best solution to low housing affordability.

In his mind (and maybe the Coalitions too?) you are superior if you hold your home rather than rent one.

For mine, there are three things that matter when it comes to the affordable housing issue.

I think we should be doing everything we can to reverse the lines shown in chart 1.

For mine all federal, and many state, economic policies should address this issue.  Housing is shelter.  It is vital.  It is a place to live first and foremost.  A vehicle for profit or an economic return a distant second.

Business grows an economy.  More money to business enterprises will help boost our productive capacity and set the foundation for future growth.

But changing this mindset – at present – regrettably is just wishful thinking.  So, let’s forget doing something meaningful here and move on.

Any major changes that affect the value of existing housing – changes in property-related taxation, removing negative gearing etc. – just won’t pass the ballot box.  So, we really must cross this out too.

Yet what would be popular with most voters is restricting home ownership to Australian citizens.  It is beyond me why a federal electoral party doesn’t run with a No Passport – No Buy policy.

Many of the things that both major political parties do in the housing market space – like first home buyer incentives – increases demand.  This is seen as a good thing by the real estate and construction industries, but it often lifts end values and hence makes housing less affordable if there isn’t a corresponding (or greater) lift in the appropriate dwelling supply.

Since FHOG was introduced in 2000, there are less first home buyers – as a proportion of the total relevant first homeowners age group – than would have been the case  (in my opinion) if such incentives were not introduced.  See chart 2. 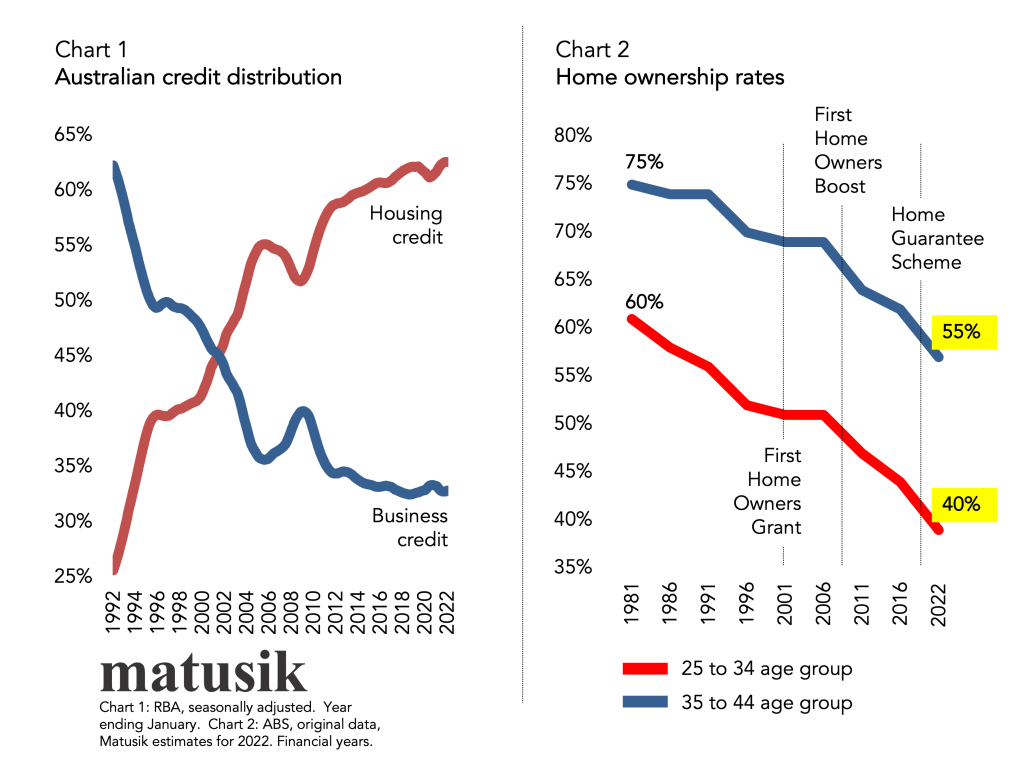 One approach would be to try and reduce demand, by aggressively lifting interest rates or restricting investment activity for example.

But as I outlined here, there isn’t enough rental supply at present due to previous investment restrictions and higher interest rates adversely affect first home buyers and often renters too, as many landlords lift rents when their costs rise.

We could also reduce housing demand by seriously capping our immigration intake.  But the business lobby – again at present – makes this a very unlikely scenario.

Plus, we could legislate that certain housing-related costs are reduced.  Think real estate fees or investment selling commissions.  I think this needs exploring but it is questionable if changes here would improve housing affordability.  It would most likely see sellers and developers pocket more of the sales price.

So, we are left with trying to lift dwelling supply.

This is really the only thing that realistically could be implemented to help improve housing affordability.

And importantly that new supply needs to be cheaper – for buyers and renters – than it currently is.

How could this be done?

Unless new housing supply is addressed then the affordable housing debate is just a lot of noise.

Those that like to rant can postulate for a reduction in housing demand or financially punishing those that already own or hold residential real estate, but woe betide any government that attempts to make changes here.

Remember often the first thing a new home buyer will ask once they have signed a contract is how fast will their new home grow in value.

This is fine and dandy, but we need to lift the number of affordable homes to rent and buy.

A good place to start would be to revisit the newly expanded Home Guarantee Scheme and lower both price thresholds by say $200,000 plus limit its application to new ‘missing middle’ dwelling builds.

Social engineering?  Maybe, but something actually needs to be done.