There is little surprise that most homeowners are either couples or live alone as they are typically older Australians.

Many who own their home outright live in a detached dwelling and most pay less than 25% of their gross household income towards housing costs. 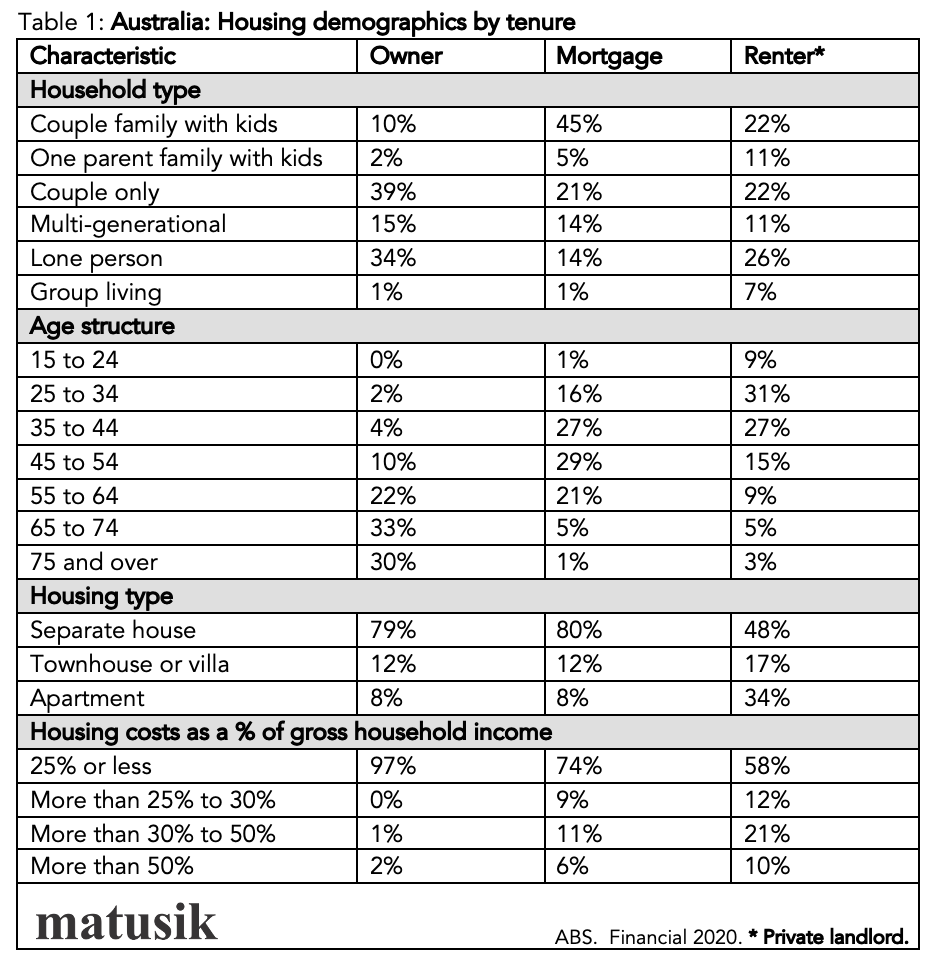 Table 1 also shows that many Aussie households with a mortgage have dependent children.

They are also middle aged, live in mostly detached houses and only 17% pay, on average, more than 30% of their gross pay on housing costs.

In contrast, Australian renters are more of a ‘mixed grill’ when it comes to household type, with private long-term tenants skewed towards a younger demographic than owners or mortgagees.

More renters, these days, live in something attached rather than detached housing.  Over one third of tenants reside in an apartment.  See chart 1. 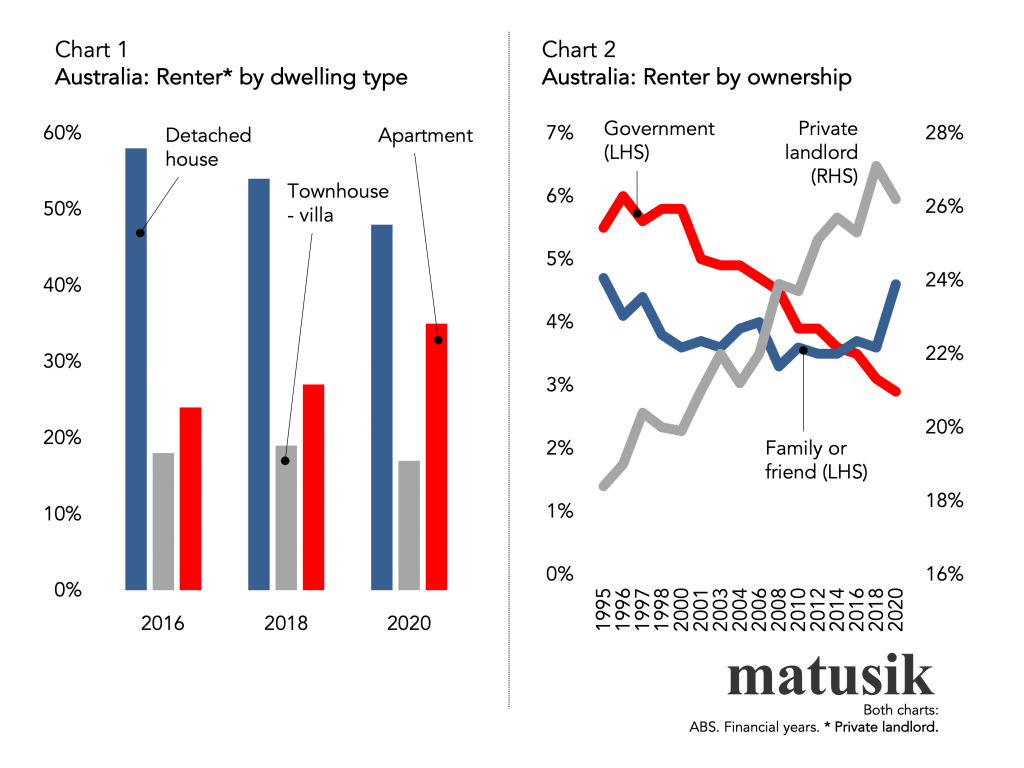 Also, of note – revisit table 1 – is that close to a third (31%) of renters pay more than a third of their wages on the cost of their abode.

And whilst this has been the case for the last five years the situation is likely to get worse as vacancy rates tighten due to the return of immigration and as new building starts tightened.

Chart 2 shows that more tenants have been ‘renting’ from family and friends in recent years.  As rents rise many more renters will be forced to either boomerang back home, share with other tenants or accept much lower digs, assuming they are available.

Some of my contemporaries have been suggesting that one reason for the decline in the rental vacancy rate in recent years is because more renters are either living alone or in a couple situation.  They say that Covid drove this change.  But the latest housing occupancy survey shows that there has been no change in the average private rental occupancy rate of 2.6 per dwelling.

A lack of investment in new rental housing is the main driver for the decline in available rental space along with many investors deciding to keep their dwellings vacant.

Whilst some landlords have opted to list on the short-term rental market via Airbnb most have opted for capital growth over a rental yield and in some locations, investors were put off by the state/territory government pro-renter Covid-related prescriptions and memorandums.

For mine, investors are better off buying a dwelling that is designed for tenants to share.

In summary it is renters that are really facing housing affordability issues.

One of Labor’s better policy suggestions is their “Help to Buy” scheme, which should help renters get into the housing market, with a 40% government down payment assisting buyers.  Ten thousand starts have been allocated in the first batch.  This is one way to lift the amount of available ‘public’ housing.

Outside of the mid-1980s renegotiation of the Commonwealth-State Housing Agreement (CSHA) by the Hawke government – which helped lift new housing starts by over 50% over the next two years – and the GFC related emergency funding provided by the Rudd government, charts 3 and 4 show that there has been a massive decline in the amount of public housing provided across Australia in recent years. 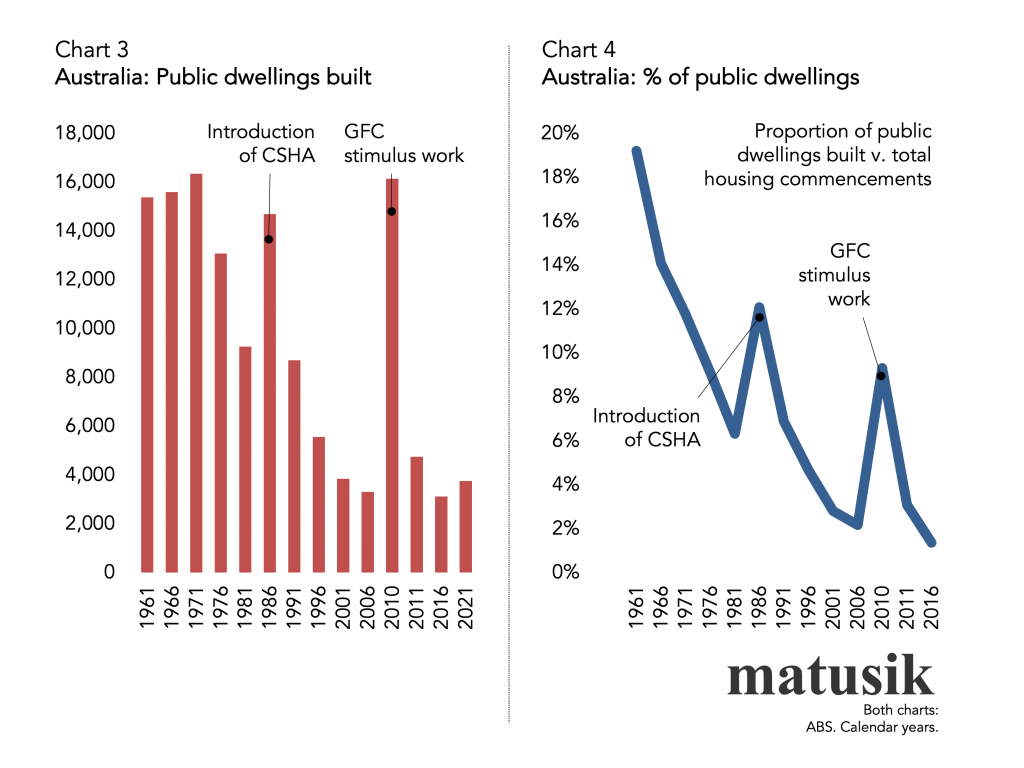 Building more public housing is one way to increase housing supply without adding fuel to dwelling prices and weekly rents.

There is some debate as to if the 10,000 “Help to Buy” spaces will actually be taken up.  I hope that they are, because as shown in chart 3, there is a need to at least repeat this volume of new public assisted builds on an annual basis.

Ideally, 10% of Australia’s new housing starts should be in the public space each year, which means about 15,000 ‘public’ new homes per annum.

Also, a topical concept at present is taxing Airbnb as per the Brisbane City Council’s latest budget.  Such moves should be popular with some residents but will do very little to switch landlords back to leasing to long term renters.

Stamps are ridiculously expensive, reduce housing affordability (at the time of purchase, where it matters most) and stops mobility.

Having an option to either pay stamp duty on settlement or pay a higher annual land tax is a good idea and one, if enacted in NSW, is likely to spread across the country.

There is little doubt that a lot of households don’t move – either to downsize or to a new area for work/lifestyle – because of the high cost of selling and buying.

Regulating real estate agent’s selling fees to a maximum set amount regardless of sale price – something like $10,000 – would also help.  These days the digital property promotional platforms do most of the heavy lifting.

And real estate types please take a breath before shooting me a nasty email.

As I have written about many times before making it easier to build would also help with rental affordability.

Australia’s planning rules are highly restrictive (now that’s an understatement!) and favours “nimbyism” that really only serves those that own a home (or are paying one off) over those that wish to become owners.

We need a lot more “missing middle” in our capital cities and major regional towns too.

Finally in this space – of increasing supply without boosting prices – more housing co-operatives should be provided.

Here residents are either members (i.e., renters) or joint owners.  It is all about providing housing and not wealth creation.

Build to Rent is a general move in this direction.